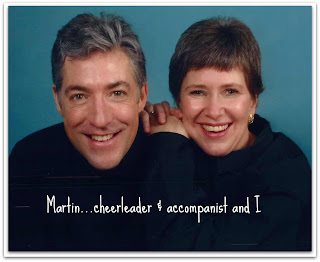 After finishing my initial phone conversation with Dr. Laurine Elkins-Marlow inspired me to continue my recording work and research into the life of Canadian/American composer Gena Branscombe. I now had a support system which included Gena Branscombe's daughter, Gena Tenney Phenix, and Dr. Marlow who worked with Gena Branscombe. Of course, I must add that my dear husband, Dan, and my wonderful accompanist, Martin, were encouraging me and cheering me on as well. What a team!


In August 2000 I was able to arrange an in-person meeting with Gena Tenney Phenix and her husband Philip. Dan and I traveled to Bridgewater, Virginia where they lived in a retirement community.


I am sure that Mr. & Mrs. Phenix were as apprehensive as Dan and I were. How would this meeting between strangers go? Would conversation flow easily? All our doubts and worries evaporated when we were met at the door by two warm and enthusiastic people. We entered their home and immediately felt part of their lives.

To my surprise and delight, Mrs. Phenix had brought out photos of her mother and family, as well as programs and sheet music. I carefully looked through all of the items noting that one picture of Gena Branscombe conducting her Branscombe Choral looked as if it had been taken at Carnegie Hall. I was quickly told, "No, Dear, Mother's Spring concerts were at Town Hall." I nearly dropped the picture on the floor. For in that picture where Gena Branscombe stood on the Town Hall stage, I had been recording her songs in that very spot. We looked at one another knowing I had been chosen.

Our conversation turned to my interviewing Mr. & Mrs. Phenix about their relationship with Gena Branscombe, mother and mother-in-law. The answers to my questions were filled with pathos, admiration, and love for her as well as honesty about Gena's strength of character and determination. When I asked Mr. Phenix about his father-in-law, John Ferguson Tenney, his response was, "He was a saint!" Mr. Phenix went on to explain that John Tenney was a man ahead of his time, promoting his wife's career, assisting in the production of her concerts, caring for his daughters while his wife worked and maintaining his own career. Mr. Tenney served as editorial assistant and historical advisor for his wife's oratorio, Pilgrim's of Destiny. He reminded me that all this took place in the early part of the 20th century. Nearly unheard of in those days.

Mrs. Phenix, in a clear and succinct manner, drew a verbal picture of her mother as one who also was ahead of her time, a working mother who composed piano works that coincided with her daughter's pianisitic abilities, who held tea parties for them, composing songs and creating plays to be performed by them. A determined and hard working woman who kept her career moving forward until just months before her death in 1977. Deeply involved in promoting American music and in particular, American women composers, she created choral programs for her own women's chorus, The Branscombe Choral, that were 50% American music. For women's and music organizations around the country suggested concert programs were created that were American in accent. Through her speeches she encouraged women to return to music through whatever venue they could for it was through community that the profound message of music would reach people. Gena Branscombe crossed the milkmen's picket line to purchase milk for her daughters explaining to the striking men that the health of her young daughters was at hand! The very essence and spirit of this woman composer was coming to life for me through her own daughter's words.

After nearly an hour and a half our visit was drawing to a close. My husband, Dan, noticed a painting of a young girl on the livingroom wall. Dan called me over to have a closer look at the painting and remarked how much I looked like the young girl. When asked, Mrs Phenix explained that the girl was her younger sister, Betty, who died during the great influenza epidemic of 1919. I looked like her sister. Another connection, unexplainable!

As we prepared to leave, we hugged one another knowing we had become friends for a lifetime, we shared the common bond of promoting Gena Branscombe's music and life, and the spirit of that woman was with us and guiding us. With tears in our eyes we drove off. I turned to look back, Mr. and Mrs. Phenix were waving good-bye. A picture emblazoned in my memory forever.

Posted by Kathleen Shimeta at 8:54 AM No comments: