The 19th Amendment to the United States Constitution was ratified 96 years ago today, August 18, 1920.  This is the amendment that guarantees the rights for all Americans to vote regardless of their sex.  YES!

Celebrate ladies and gentlemen, yet, keep in mind this Constitutional amendment did not happen overnight.  Strong men and women believed in and fought for the suffragette movement.  They never lost sight of their ultimate goal, “The right of citizens of the United States to vote shall not be denied or abridged by the United States or by any State on account of sex.”

During the mid 1700s women were allowed to vote in certain states.  Slowly from the 1770s through to the 1790s, states began to rescind those rights.  The United States Constitutional Convention of 1787 allowed that women’s voting rights would be left to the individual states. 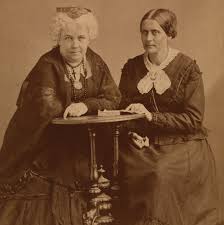 In 1848 Elizabeth Cady Stanton and Susan B. Anthony convened the first convention for women’s rights in Seneca Falls, New York.  Joining them and impassioned in his beliefs for women’s rights was Frederick Douglas.  As a home is built on a foundation, the suffragette movement began to build its foundation because of this convention.  The movement grew, subsided during the Civil War, gained and lost momentum.  Societal change is never easy.  Opposing sides battle out their beliefs trying to convince their supporters and deniers that they are by far superior and hold the absolute truth on the subject!

By 1872 Susan B. Anthony registered to vote and voted in Rochester, New York citing the 14th Amendment to the Constitution which granted citizenship to, “all persons born or naturalized in the United States.”  She believed the amendment allowed her the right to vote.  Days later she is arrested and the following year denied a trial by jury, then, loses her case.  Progress is slow.  Passion wins out. 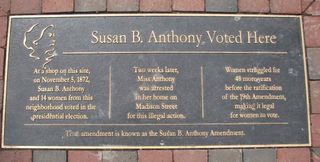 In 1870 Utah and Wyoming grant women’s suffrage, Washington State welcomes women voters in 1883, California joins the movement in 1911, Oregon in 1912 and the list goes on.  Many states deny the suffragette movement.  Remember, it is men who are voting on this issue. 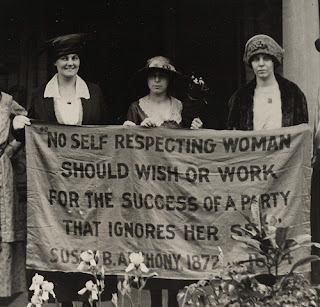 Seventy two years of slow, painful, methodical, back braking progress and American citizens whether men or women were granted a constitutional amendment for equal voting rights.

What really is the issue here?  Is the issue only women’s voting or is there more depth to the subject?  In 1914 anti-suffragette Grace Duffield Goodwin put forth a list of commandments rejecting women’s voting rights.  It was published in the New York Times.

Reading over her list I was amused by some of her reasons and why shouldn’t I be?  It is 102 years later and we have changed our views.  What struck me most was the perception of a sense of loss of control and then fear of what will happen to our society if we change.  We ponder and obsess about the future without staying in the moment and seeing what the reality is of the here and now.  Yes, every one of our actions has an impact on our future.

Citing women’s traditional roles in society and the stability of civilization as it was, the country would lose special privileges accorded by law.  Women’s power in 1914 was considered unique and instrumental to the operation of our country.  To mess with that balance would take away the rights of women in different spheres.  What spheres would those be?

Mrs. Goodwin then states that giving women equal voting rights to those of men, meaning their husbands, brothers, uncles, sons and fathers, would even the playing field in areas where women held the upper hand.  My response 102 years later is, “Really?”  She did not want to upset and I quote, “the hen house”. 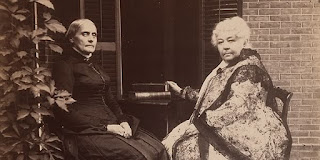 Let us learn from the past the lessons and examples Elizabeth Cady Stanton and Susan B. Anthony set forth; the rights of all citizens to vote no matter their sex.  They stood up to fear and those who thought we would lose control of our country.  These two women must have had their own fears, yet they recognized women would not denigrate voting in our country rather women were citizens who would be making well thought and intelligent decisions for the betterment of themselves, their families and our country.

Now, it is our responsibility to continue to strike down fear and put aside our desire to control everything thereby giving ourselves a freedom…………..that freedom is VOTING! 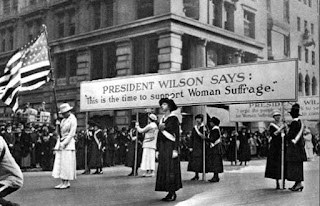 Posted by Kathleen Shimeta at 2:04 PM