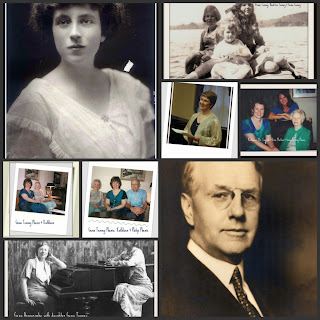 As I continued my work recording the songs of Gena Branscombe, it was my desire to meet any surviving members of her family. After reading Dr. Marlow's dissertation I knew two of Miss Branscombe's daughters had died during her lifetime and then, hoping that genetic longevity played a factor, maybe one of the two oldest daughters would be alive.


In continued research I discovered that Miss Branscombe's music was under copyright. Martin suggested I call ASCAP to inquire if there was someone holding those rights. I called the ASCAP office, inquired about the holder of the rights, there was silence so I asked further, "Would this person be old?" The answer, "Yes, if they are still alive!" From that I knew that one or hopefully both of the two oldest daughters was alive! ASCAP would not give out the name or address of the person.


Following this lead one step further, I wrote a "Dear Family Member" letter explaining the beginnings of my project, how I discovered Gena's music in the New York Public Library, the recording of the songs and my wanting to meet family members. I gave my contact information and asked if they would be so kind as to be in contact with me. I sealed the letter and put it into an envelope addressed to ASCAP asking them to forward it to the copyright holder of Gena Branscombe's music. Then the wait....what seemed to be an interminable wait...


I continued my work at the New York Public Library Special Collections Department looking at every song, looking at her manuscripts and published works. I was in awe of the output of this woman who had composed songs, chamber music, choral works, an opera, instrumental works...so much yet she seemed to be unknown. Studying one of her manuscript orchestral works I put my hands on that paper where her hands had worked and touched those very lines and I said, "Gena, please have your family contact me!" My palms of hand began to tingle. Why is that happening? It had been 10 days since I sent my letter to ASCAP!


At 9:45AM the next day my phone rang, I answered and then a very proper voice on the other end inquired, "Is this Kathleen Shimeta"..."yes"...."This is Gena Tenney Phenix. I am Gena Branscombe's oldest daughter!" My heart began pounding. Mrs. Phenix continued to speak, reassuring me that my recording of her mother's songs was wonderful idea and she approved 100%. Most important she was thrilled I had found her mother's music in the library as it deserved a chance to be heard now. Our conversation flowed easily as if we had known one another all of our lives.


We spoke for 45 minutes on subjects ranging from her family, her sisters, father, her mother's career and her own life. Dr. Vivian Tenney had died in 1989 and she, Gena Tenney Phenix was the sole survivor of her mother. I asked Mrs. Phenix to recall any of her mother's songs that she would like included on the CD and I would gladly record them.


As we finished our conversation she gave me Dr. Laurine Elkins Marlow's phone number. Mrs. Phenix had been with Dr. Marlow as she interviewed her mother, Gena Branscombe, for her dissertation. She spoke highly of Dr. Marlow and told me it was an absolute must for me to be in touch with her. Finally, I had a contact number for Dr. Marlow. I had read her dissertation and had not gotten around to finding her.


As we began our goodbyes, Mrs. Phenix said to me, "I know my mother is looking down on you, pleased that you found her music. You were chosen by mother to do this work!" I was speechless as I hung up the phone. Me speechless.....


Moments later I picked up the phone and dialed Dr. Marlow. A sweet voice answered and I asked for Dr. Marlow...response...."speaking." I explained who I was, Gena Tenney Phenix had given me her number, then all the details of my finding the music, the beginning of the recording and my continuing work on the collection in the library. There was dead silence.... my heart skipped a beat, then I thought "darn, someone else beat me to this collection and has already completed a CD"....when Dr. Marlow said, "I've been waiting for someone to find that collection!" I nearly jumped for joy.


From Dr. Marlow I learned that when Gena Branscombe died, she went to the apartment where for 18 months she had interviewed Miss Branscombe and had begun the work on her dissertation. There amidst the piles of music, articles and books piled under the piano, on the piano, on tables and chairs, Dr. Marlow began the work of organizing all the manuscripts and published works, recordings and programs. She put them in alphabetical order and then began the process of typing, yes typing a catalogue list of each work. This is tedious work especially organizing works of a composer.
Gena had written multiple manuscripts of any given work, changing the instrumentation whether for full orchestra, then chamber orchestra, or piano with several instruments. Her choral works would be written for women's chorus, then 4 part men's chorus or SATB. Each piece was a separate entry.


As Laurine and I completed our one hour conversation, she said to me, "You were chosen for this work!" Twice in two hours I was told I was chosen.
My first contact with Gena Branscombe's daughter, Gena Tenney Phenix and Dr. Laurine Elkins Marlow was now the beginning of our work together. Part II.....of Meet the Family will come in a few days. Thank you Gena Branscombe!

Posted by Kathleen Shimeta at 8:35 AM