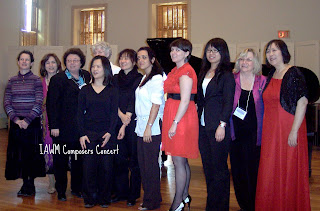 Attending the Festival of Women Composers at Indiana University of Pennsylvania for the third time was an experience I shall never forget. Organized by Dr. Susan Wheatley, Dr. Sarah Mantel and their graduate assistant Rachel Hagar, the Festival presents concerts, lectures and presentations on the works of women composers, musicologists and performers both present day and historical.

Several years ago, Dr. Laurine Marlow and I offered a lecture recital on the vocal works and life of Gena Branscombe. This year, I attended as an audience member to take in the wide variety of presentations, to meet new composers and old friends. The Composers-in-Residence were Dr. Deborah Kavasch and Dr. Rosephanye Dunn Powell and Hasu Patel, sitar, was Artist-in-Residence.

From Wednesday, March 17 through Saturday, March 20th the days were filled with music by women. Dr. Kavasch presented a Master Class on extended vocal techniques and then performed a recital of her own works. Hasu Patel gave a lecture presentation on the art of the sitar and tabla then appeared in concert.

Dr. Katherine Eberle performed her one-woman show “Pauline Viardot: Composer, Singer, and Forgotten Muse.” Katherine and I were classmates at CCM quite a number of years ago and I had the pleasure of introducing her performance. Her concert done in period costume and accompanying herself was enthralling as she spun out the story of Viardot’s life as a much sought after performer, composer and lady of the day. With humor, beautiful singing and poignant acting, Katherine did a great job.

One particular lecture that was of interest “Call Me Dika – Dika Newlin’s Irreverent Influence on 20th Century Music.” I had never heard of this woman and soon learned she was a child genius, child prodigy whose symphonic composition written at age 11 was played by the Cincinnati Symphony. More important she was the last surviving student of Schonberg with whom she studied at a young age. She kept extensive diaries of her times with him. Dika Newlin was composer, performer, teacher and a bridge between eras of our musical heritage and who has been overlooked …. one does wonder why. 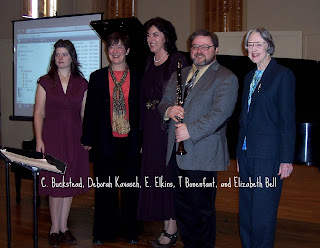 Having composers in attendance at your concert to hear their works is a thrill for the composer and a bit unnerving for the performers! Dr. Eleanor Elkins, Dr. Christine Buckstead and Dr. Timothy Bonenfant of Angelo State University in San Angelo, TX presented works by Barbara Harbach, Elizabeth Bell and Deborah Kavasch. The latter two were at the concert and I am sure they were more than pleased with the performances by these three accomplished musicians!

My colleague and friend, Dr. Marlow lectured on “Blacks and Bays: Female Organists in Texas Horse Shows.” Laurine’s love of horses and all activities surrounding that subject came to life when she shared the history of horse shows from the clothing, horse adornments and then the importance of the women organists who play for the shows. 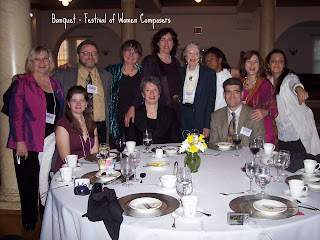 The final concert of the Festival was given by the wind ensemble and chorus of Indiana University of Pennsylvania performing works of women composers including Dr. Kavasch and conducted by guest conductor Dr. Kristin Tjornehoj and four alumna conductors of the University.

Thanks to Dr. Wheatley, Dr. Mantel and Rachel Hagan for an inspiring Ninth Festival of Women Composers. I look forward to attending the Tenth Festival in two years time.

Posted by Kathleen Shimeta at 8:45 AM