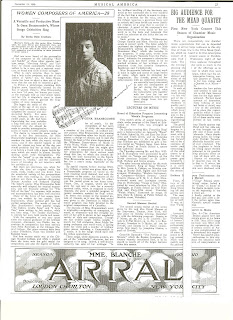 The title of the December 11, 1909 article taken from the publication Musical America was “Women Composers of America – 28: A Versatile and Productive Muse is Gena Branscombe’s, Whose Songs Celebrities Sing” authored by Stella Reid Crothers. Imagine one hundred one years ago at the age of 28 Gena Branscombe was the featured interview in the prestigious magazine of the music world.

At the time of the article Gena was studying piano and composition in Berlin yet back in America she was being hailed as an accomplished composer of art songs, orchestral and instrumental works. A well-known authority who remained nameless was quoted in the article, “In her brilliant handling of the harmonic material at her command she is ever mindful of the fact that a melody is meant to sing – that it is written for the voice, and that the richest resources a generous fancy and an artistic skill may lavish can never justify the creation of a song that is unvocal in character. A proof of the composer’s nice discrimination in every detail of her art work is in the taste and judgment that mark her selection of the lyrics she has set to music.” Herbert Witherspoon, David Bispham, George Hamlin and Madame Lillian Nordica were a few of the great singers of the era who performed her songs in concert.

Indeed her songs are melodic with an undercurrent of late German romantic harmony bubbling below the singer which dictates the interpretation of the poetry. Complex songs with the attention she gave to tempi and dynamic markings might be called obsessive today yet if the interpreter follows them, her passionate songs come alive and soar.


Being featured and promoted in this magazine while studying abroad helped Gena's career move forward and kept her in the public eye upon her return home. What a fine tribute to a woman composer struggling to get her music heard!
This 101 year old article came to me through EBAY!
Posted by Kathleen Shimeta at 1:04 PM