Across the Blue Aegean Sea 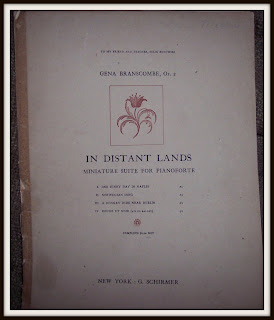 Hunting for Gena Branscombe’s published music has become a hobby for me. In my first blog post I wrote about an original three-measure manuscript that I found online.

Searching E-bay and other internet sites countless times for Gena’s sheet music has made me lucky enough to buy many of her compositions. Along the way I communicated with sellers asking if they had any of Gena’s other works or if they would be so kind as to remember me if they found additional songs or piano works. I have made E-bay/internet vintage sheet music friends!

Many of the sellers went to my website and read about my project and commented what a remarkable story I have told over the past 10 years.

Of all these transactions and communications the most recent one touches my heart deeply. Listed on E-bay was a book of piano pieces Gena had published in the early 1900’s. I quickly put a bid on it then waited for the days to pass, all the while hoping I won the auction, and, of course, I did. The seller notified me that he was mailing the music the next day and added, “I hope our E-bay paths cross again sometime in the future.” My response was the usual that if he found any other pieces to please let me know.

One day later I received an e-mail from him saying he had found a song of Gena’s and would gladly sell it to me. In addition, he had quite a pile of vintage sheet music and would continue searching through it to see if there was any of her other works. He held on to that song and if anything else was found he would then put everything together in one sale.

Imagine my surprise during Christmas week when an envelope arrived from the seller, enclosed was the song….no invoice included for the sale ….just a note saying that now the song was home where it belonged and this was a little Christmas gift from him to me!

In a season filled with mindless over-spending, gift giving, here was a gift given from the heart to a stranger many miles away. It gave me pause and a moment to reflect on the true meaning of Christmas. Something so simple, so true, kind, selfless and from the heart.

The internet is a marvelous tool. The seller searched my website, read all about my project and commented what an act of love this was. I, in turn, found his website where I learned he is a living legend St. Louis Blues performer! No wonder we found one another and we are both mid West people! 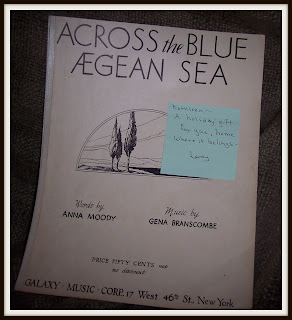 When I e-mailed my heart-felt thank you, in response I received one of the most poetic replies I have ever read, quoted verbatim below:

And now, 75 years later, grateful Midwestern hearts return this precious gem back to New York where its journey began, to the one person on earth who would truly know its worth: Ms. Kathleen Shimeta. Remember us, Ms. Shimeta. Remember the steady Midwestern hands that kept Ms. Moody’s words and Ms. Branscombe’s fragile legacy safe and dry, so they could return home to you…where they belong.”

I read and reread his words overwhelmed with the philosophy of how connected we all are. The history of who touched, protected, played/sang and loved that piece of music over the past 75 years until it came to me is priceless.

My seller purchased one of my CDs as a gift to his brother-in-law who was intrigued by Gena Branscombe’s music and my project. I autographed the CD then gift wrapped it sending it off knowing how deeply our souls are connected through the power of music.

We are hoping that one day in the future I will be able to take my Gena show to the St. Louis area and there get to meet my new found dear friends.

By the way, I have kept my seller’s name private, yet I think now is the time to thank Mr. Leroy Jodie Pierson for his thoughtfulness, kindness and friendship. Thank you Leroy!
Posted by Kathleen Shimeta at 9:42 AM 3 comments:

Labels: A Christmas Gift from the Heart, Research 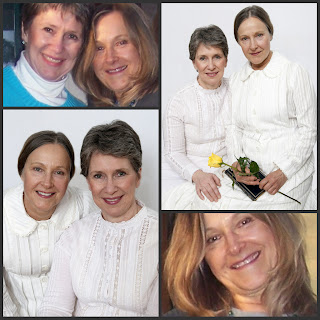 At Barbara’s suggestion we invited Kate Bushman to be our director and help us develop our idea into a well polished and intriguing show. One year ago we had our first meeting and our show, “I Told My Soul to Sing” is now in the creative process.
Stay Tuned!
Posted by Kathleen Shimeta at 12:40 PM No comments: