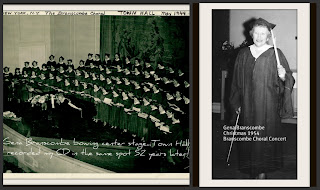 A 60 voice women’s choir….women coming to rehearsal after work or commuting into New York from New Jersey or Connecticut to sing and perform…women dedicated to the existence of the Branscombe Choral from 1934-1954. For 20 years these women performed Christmas concerts at the Broadway Tabernacle Church and in the Spring at Town Hall. There were Christmas carols to be sung for the commuters at Grand Central Station and Pennsylvania Station, radio broadcasts on WJZ and WOR, concerts at the first United Nations in Spring Lake Park and at the World’s Fair. Dedication, music making and friendship centered around their leader, fund raiser, organizer, inspiration and conductor, Gena Branscombe.


As I read the sections about the Branscombe Choral in Dr. Marlow’s dissertation I kept wondering if I would possibly find one of the Choral members…maybe even interview her? Finding someone who actually knew Gena as a conductor and teacher would add depth of character for my one-woman show. Who were these ladies? What were their lives like? Possibly find one and how would I do that since over 50 years had passed since their final concert?

Again, the web and websites are a blessing in this age of research. I posted on choral websites asking if anyone knew a woman who had been in the Branscombe Choral. A conductor responded that one of her women’s choir members mentioned she had been a member but we could not now find her. Darn! On another website I posted a picture of the Branscombe Choral from 1949 with all the names of the members. Slowly inquiries came in….one person had a bought a house from a Choral member, though she did not think the member was still alive, another recognized her grandmother as a member but she also was not alive. Another e-mail came from a niece of one of the members who recognized her aunt, Amy Flashner, in the Branscombe Choral picture! Amy had been a 20 year member of the Choral. A nephew contacted me surprised to find out his Aunt Edith had any interest in music much less performing in a women's chorus.
Months and months would go by between inquiries, and then one Sunday afternoon in June 2005 I opened an e-mail from Elsa Jean Davidson who stated that her grandmother and mother had been in the Branscombe Choral for years. She had in her possession the Branscombe Choral scrapbooks, would I like them? I put my head down on my desk in disbelief. How did this happen? I immediately responded, “YES, I would like the scrapbooks.” The writer worked in Manhattan and we immediately made arrangements to have lunch and for me to pick up the scrapbooks.

Emma Davidson had been a member of the Branscombe Choral for nearly 20 years and was the caretaker of the scrapbooks. Upon Emma’s death, her daughter took the books and eventually they came to Elsa Jean. Cleaning out her house and being a musician herself, Elsa Jean knew the books were important, should not be thrown away but did not know what to do with them. Surfing the web she found my website and contacted me.
Twenty years of Branscombe Choral history were in those books. Reviews, letters, telegrams, programs, newspaper articles, the by-laws of the Choral, and much more.


Imagine the surprise in the voices of Dr. Marlow and the Branscombe-Phenix family when I called them to tell them I had the scrapbooks!

Little did I know that in 2008 I would have the pleasure of meeting two surviving Branscombe Choral members. Each experience was different as one was a complete surprise and the other came via e-mail.

March 30, 2008 after a performance of my one-woman show, “Life! Love! Song! A Visit with Gena Branscombe” at Hofstra University, we had a talk back where the audience is free to ask us questions. A woman raised her hand and said, “My mother was a member of the Branscombe Choral and she has some things she would like to give you.” Martin and I looked at one another in complete shock and then I said, “She’s here?” Agnes Conway, former Branscombe Choral member, had seen a newspaper advertisement for my performance and immediately ordered tickets. Agnes had been cleaning out her house and had come across her pictures, programs and letters from Gena Branscombe. She could not throw them out and then, there was my concert! Agnes put the pictures in a photo album and all the remaining memorabilia she put into a folder embroidered by her with the Branscombe Choral name! What a shock to meet her.

I received an e-mail from a man in Jamestown, NY whose 94 year old grandmother had been a member of the Branscombe Choral and she was alive! What a thrill. The e-mail exchange began and eventually I interviewed Mrs. Marie Zieres via telephone. We had several long conversations about Gena Branscombe, her conducting, her example to these women and the power of their music making. In June 2008 Dan and I drove to Jamestown to meet Mrs. Zieres in person. I brought with me the Branscombe Choral scrapbooks to share with her. Her memory of her work with Miss Branscombe’s mission to help the members of the Choral make music to the best of their ability which then would make an impact on the world as a whole was clear. Much to our surprise, Mrs. Zieres had brought out her Branscombe Choral programs, her choral folder that was covered in the red material of their performance robes, acetate recordings of the concerts and some letters she had received from Miss Branscombe. She had saved these items for over 60 years. How many of us save items for their sentimental value yet I knew that Gena Branscombe had created a unique bond with the members of Choral and they treasured her boundless gifts to them. We bid farewell to Mrs. Zieres and her grandson knowing we had made new friends. Sadly Mrs. Zieres died in June 2009, one year after our meeting. I shall never forget her.

Recently through a friend of a friend I made contact with Henrietta Pelta of Los Angeles, California. Henrietta had been an accompanist for a 1946 Branscombe Choral concert at Town Hall. Her memories of working with Gena were professional and filled with strength of character as a woman and musician.

The history of the Branscombe Choral carries on from the memories of these women, their memorabilia and the impact that Gena Branscombe left on their lives and music making. Enjoy the pictures of these ladies and feel the spirit they felt while singing for the world! 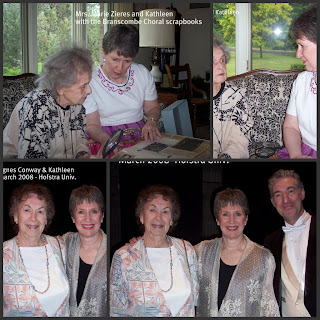 Posted by Kathleen Shimeta at 2:46 PM No comments: 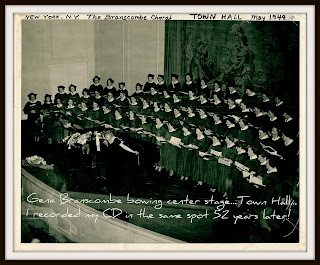 Posted by Kathleen Shimeta at 9:50 AM No comments: