Blame……as human beings we often blame or find fault with others for our failings or missteps while as individuals we fall short of being aware that it was “me” who is at the center of personal controversy. Yet, maybe blaming someone else could have a positive effect on a friendship, especially all in good humor, is a good thing!

Over the past few years as I’ve written my blog about composer Gena Branscombe, I have also given tribute to people who helped me down this unknown path of recording, creating a one-woman show, writing a blog and what to do next.

Of course, some could question, former? Did he leave because I drove him out with my practicing? No, Roger left by his own decision yet before doing that his foot prints on my life and Gena project were made indelible.

In 1998 Roger purchased the apartment above Dan’s and mine from Evan Pappas, yes the Evan who is the director of my one-woman show. Music theatre person sold to a music theatre person! Knocking on our door the day he took possession of the apartment, Roger and his dog, Buddy, entered our lives with love, friendship and a great deal of entertaining humor. Our apartment became Buddy’s second home where he was comfortable enough to stay with us when Roger was out of town. 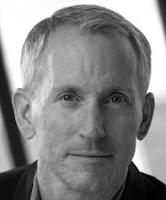 Possessing a beautiful singing voice, wonderful acting skills and a razor sharp ability to imitate people, Roger has been in the casts of Phantom of the Opera, Jekyll and Hyde, Woman in White, The Adding Machine, Our Town and 1776 to name a few. He’s a hard working and determined professional.

Roger and I have enjoyed a warm and treasured friendship. We challenge each other’s humor exchanging sharp, loving barbs, offering each other advice and just plain being at peace with one another.

So, what’s Roger’s fault? Among his other talents being a listener who offers thought provoking advice is a strong one. As I began my research into Gena Branscombe in 1999, I would talk to Roger about what I had found, questioning myself about what direction I should go and wondering where I would end up. Ever encouraging, Roger advised me that the unknown is a good place to go for creativity is limitless. He kept asking me what would be the problem if I ventured forth not knowing the end result? As human beings we all look for security yet I took Roger’s advice and moved forward to what looked to be the unknown. See Roger….it’s your fault! Gena Branscombe has entered the conscience of the 21st century music world because of your advice.

Roger’s abilities as advice giver led him to attend Coaching University and he has become a certified life coach. Not only is he certified, he now teaches courses, continues his coaching education attending seminars and keeps a constant clientele challenged! As he says he’s Chief Everything Officer at Coaching NYC, Inc!

With Roger’s support and wisdom, he has spent hours helping me with performance issues. His insights, gentle nudging and guidance have helped me to grow as a person, musician and performer. See, Roger, it’s your fault!

On August 27, 2009 I posted my first blog and that’s Roger’s fault, also. Nearly a month earlier, I was having coffee with Roger. Ever a techie and someone who knows a great deal about the workings of the internet, Roger advised me to begin writing a blog. He told me I had an unusual story to tell and that a blog would be a good way for the world to learn of my journey. Meeting up against my Irish stubbornness, he gently kept chipping away at my protests of not enjoying the act of writing. “Just do it,” was his advice. OK, I did it and now have been writing a blog for 2 ½ years. See, Roger, it’s your fault that I have learned to enjoy writing and actually look forward to creating my next entry!

A man of great depth, wicked humor who is a gourmet chef, mixes great cocktails, throws a New Years’ Eve party not to be missed and is married to one of my favorite people, Brad Florin, is my friend, Roger DeWitt.

Buddy, the dog, went to doggie heaven a few years ago and now Buster, dear little Buster dog is part of our lives. 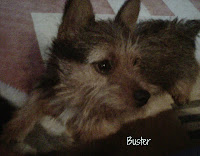 I thank Roger for his help, prodding and friendship, yet he reminds me that it is me who has done the work. Yes, I have done the work with the rallying help of Roger….how blessed am I.


Posted by Kathleen Shimeta at 2:33 PM No comments: