Among my most treasured items is a packet of letters, Christmas cards and birthday cards from my Grandma Shimeta.  The envelopes and letters are tied together with a ribbon.  They represent my communication with my Grandma from my college years until I was married.  There in her shaky penmanship she tells me about her garden, fruit trees in her yard, my cousins, aunts and uncles, her neighbors, which people stopped by her house for a visit and stayed for dinner and what she would be doing for any given holiday.  Her word usage and verb conjugations are, if nothing else, creative as English was her sixth language and she only had an eighth grade education.  Yet, as I read them I can see her sitting at her kitchen table writing, smell the food she may have cooked for lunch or dinner and imagine being in her presence or staying in her warm, inviting home.  Those pieces of paper, my Grandma’s letters, are my history with her.

Letters……hand written letters are precious keepsakes and a vision into the past like nothing else in our lives.  They tell us stories of our present and past, give us a view into the history of the day the letter was written and most important reveal the letter writer’s inner most thoughts and emotions.  When you hold that letter in your hand, you hold a part of the person who wrote it.

The world of music embraces letters whether being written, received or read.  From Mozart, Massenet, Offenbach, Verdi and Tchaikovsky are opera arias and duets about letters.  Emotions, lots of emotions are expressed in those letters as only opera is capable of conveying.  In the pop music world we have the songs, “P.S. I Love You,” “Take a Letter, Maria,”  “Signed, Sealed, Delivered,” and I’m Gonna Sit Right Down and Write Myself a Letter.”  Letters …….. the importance of letters for without them our understanding of history would have blank places.

When a music researcher comes upon letters either written or received by a composer, a new perspective of that person comes into view.  Composers were notorious letter writers when they did not have the present day luxury of the internet, texting, Facebook or tweeting. 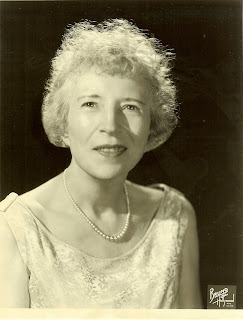 Over the years of getting to know Gena Branscombe, I have learned she was a prolific letter writer.  In the music publisher Arthur P. Schmidt’s collection at the Library of Congress are letters from every composer he published.  In Gena’s file are pictures of her, her daughters and all of her letters to Mr. Schmidt.  Many expressed her thanks for the royalty checks she received and an explanation of what music she was working on.  Then, there was always a paragraph or two about her personal life whether about concerts she was performing or the details of her daughters’ shenanigans!  Some of her letters were ones that broke my heart.  She would request a loan against her future royalty checks as she needed the money to pay for her daughters’ medical bills.  The letter where she described the death of her daughter, Betty, was particularly poignant. There was her life spelled out in her own handwriting with her emotions bubbling from the page I held in my hand.

In my possession I have several of her letters thanks to members of the Branscombe Choral or their families.  After the Choral disbanded she kept in contact with the members through letter writing commenting on the women’s lives, their children, sending them copies of articles she wrote and always wishing them good health and happiness.  She wrote thank you letters to those who hosted her for lunch or those who had visited.  With a positive and encouraging word to anyone with whom she had been in contact, she wrote and wrote letters.

Reading Miss Branscombe’s letters I have learned she was a caring, loving individual with exemplary communication skills.  Letter writing was a way to self-promote her compositions and performances of her music.  She was a driven and passionate person whose life had not been easy.  Despite all that, music was her life no matter the road blocks.  Her ardor and emotions emanate from the paper on which she wrote.

This past week, two more of her letters came into my possession.  Written to pianist and author, Anya Laurence-Thiel, Miss Branscombe expresses her thanks for Anya’s visit and her sharing the music of composer Arthur Farwell.  The second note congratulates Anya on the completion of her book and Gena’s wishes for good luck with her publishers.  The letters were written a few months before Gena’s death in July 1977. 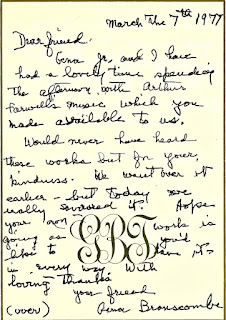 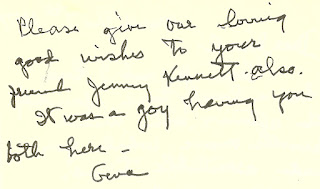 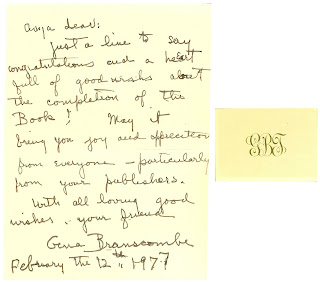 Included with these two letters was an October 1977 card/note from Gena Tenney Phenix, Gena Branscombe’s daughter, to Anya.  Gena, Jr. also congratulates Anya on her book, then thanks her for dedicating the book to her mother, and, requests that copies be sent to Laurine Elkins Marlow and Dr. Adrienne Fried-Block.  I took notice that Gena, Jr. signed the card, “The Two Genas.”  Her mother had been dead three months.  The daughter carries on her mother’s legacy of writing letters and showing her appreciation for the continuance of her mother’s music career. 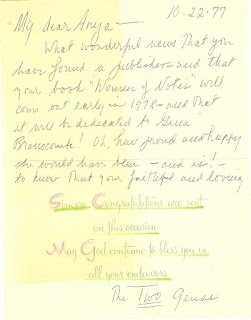 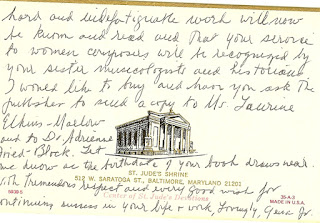 What can we learn from these examples of letter writing?  Putting pen to paper, using our own physical being to write and express your emotions and happenings in life becomes a piece of your personal history.  For the recipient of your letter, the information fills in the blanks of your everyday life…..what you are doing, what you have eaten, how you are handling stress, what books you may be reading, what play you saw, your relationships, health and the list goes on and on.

Yes, we can express all that in a typed e-mail or Facebook posting using all the internet abbreviations and emoticons.  Writing may be considered old fashioned right now.  Returning to letter writing, in my opinion, is a must.  We engage our physical being to sort through our thoughts and emotions, we touch pen and paper with that in mind and give the gift of ourselves unlike any other kind of communication.....the telling of your own history.