In our adult lifetimes we can look back at the teachers whose classes we attended whether in grade school, high school or college then wonder how we ever learned anything.  Yet, amongst the multitude of teachers are gems, real gems of education who taught us their passion for the subject matter.

In my education which includes a Master degree, I have had maybe five outstanding teachers and many fine teachers.  One of those outstanding gems of a teacher was my freshman in High School English teacher, Miss Peg McIntyre.  From her I learned the basics of our language and most important I learned to love Shakespeare.  We studied and read out loud “The Merchant of Venice” with Miss Mac reading Shylock.  She explained the meaning of each scene, the under currents of the plot, each character’s motivation and the history of the play’s era. 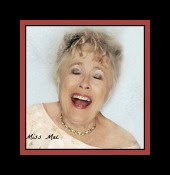 Miss Mac advised her class to have a dictionary at hand when reading Shakespeare.  You must look up all the words you don't know and write the definitions in the margin so you will remember them!  To this day when I read Shakespeare, my dictionary is next to my book from which I am reading the play.

A few years ago when Al Pacino performed Shylock in the “Merchant of Venice” for Shakespeare in the Park, Dan and I were lucky enough to get tickets.  I had no time to review or even read the play in preparation.  As I sat in the outdoor theatre mesmerized by the performances at hand, I recalled the play as if I had studied it with Miss Mac just a short while ago.  The plot unfolded, I remembered much of the dialogue and the characters’ motivations and for me it was thrilling.

Having stayed in touch with Miss Mac over the years, I wrote her a note thanking her for being the gem of a teacher she was and telling her how the story and characters of “Merchant of Venice” had come alive because of her all these many years later.  Nearly two weeks went by when the phone rang, on the other end, Miss Mac saying how surprised she was to get my note.  We laughed, reminisced and then she explained something that took me by surprise.

My freshman year was the first time in her many years of teaching that she had taught “Merchant of Venice” and she was scared teaching it to us.  “Scared?,” I said and her response was, “I didn’t know what the hell I was doing.  I was afraid you students were not learning the play.”  I reassured her she had taught the play just fine!

Miss Mac left my high school after my freshman year, went on to teach elsewhere and then married.  As I said, we stayed in touch.  Yearly I sent her a birthday card with a letter.  Two weeks ago I sent her a belated Happy Birthday card and in today’s mail I received a letter from her husband telling me she had died in July.  My heart sank….my gem of an English teacher who taught me to love Shakespeare is gone having left an indelible mark on me and I am sure many of her other students.

Grace “Peg” McIntyre Lamb….a classy lady, always dressed in the most beautiful clothes, hair coiffed, nails manicured, with an Irish glint in her eye, a smile that lit up her classroom and a gem of a teacher.  Miss Mac, you will always be with me every time I attend a Shakespeare play because you knew how to teach…even if you didn’t know what the hell you were doing.
Posted by Kathleen Shimeta at 5:48 PM No comments:


Writing this blog just two weeks before Thanksgiving, I remind myself of all the beautiful Christmas music that will flood the airwaves very shortly.  Gorgeous secular tunes that remind us of how wonderful it will be to be home for Christmas, twelve days of Christmas with birds, dancers and golden rings for gifts and then, reindeer with red noses set a mood of crisp winter air.  Carolers may appear at your door singing “O Holy Night” or “O Christmas Tree.”  Our memories recall these words and melodies easily, no matter what our age.


In 1912, Arthur P. Schmidt published Gena Branscombe’s beautiful Christmas song, “Hail Ye Tyme of Holiedayes” with words by Kendall Banning.  Yes, old English words were used to give a feeling of merry old England’s celebration of Chrystmasse.  Recalling mistletoe, hollie, feastings, noblesses dressed in gold and songs of happiness, the poet and composer declare a tyme of peace, madrigals for halle and that Chrysten gentlefolke be reminded that Chryst will be with alle! 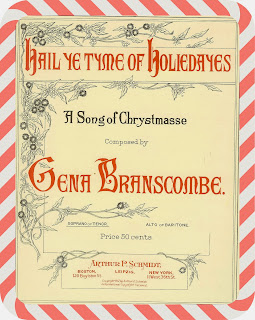 A bright, cheerful song filled with Gena’s usual zest for life, “Hail Ye Tyme of Holiedayes” became her best selling song earning her more royalty money than any of her other published compositions.  Not only did she compose this as a solo song in a multitude of keys, her own Branscombe Choral performed it in an SSAA arrangement nearly every year on their Christmas concert at the Broadway Tabernacle Church.  They also performed it for the commuters at Grand Central Station and Pennsylvania Station in New York.  In addition, she arranged the song for SATB and men’s chorus.  She covered all the bases of publishing this work for every possible musical need!


This Christmas song is performed during my one-woman show where Gena recalls her beloved Branscombe Choral’s lush, rich sound from the alto section!


A beautiful Christmas anthem not in the standard Holiedaye repertoire today, yet a song that clearly expresses Miss Branscombe’s old fashioned beliefs.


May all of our Holiedayes whether it be Chanukah, Christmas, Winter Solstice or Kwanza be filled  with peace, kindness, happiness and gentlefolke!
Posted by Kathleen Shimeta at 12:29 PM No comments: