March 12, 2012, an e-mail from Melissa Maize, Director of Resource Development at the Good Samaritan Society Quiburi Mission in ,  “I believe that one of our residents, Mary Jo Steebner, is in your photo! Please contact me.” 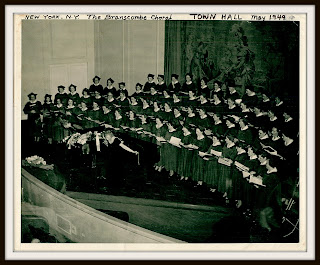 The photo mentioned is of the Branscombe Choral performing at Town Hall in 1949 and is posted on my website.

Of all the stories I could recount about my contact with former Branscombe Choral members or their family members, the one that touches me the most is Melissa’s.  A resident in their dementia unit, who though not very communicative, had told Melissa she had sung with the Branscombe Choral.  There were no family members or friends to corroborate Mary Jo’s life journey.  Melissa asked if I would have any information that would help her engage her resident to tell her story. 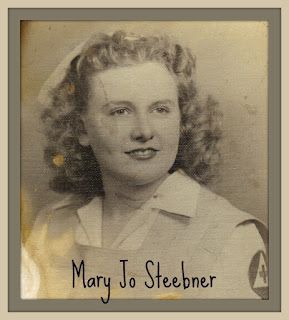 My response was that Miss Steebner had been a member for only one concert, December 1954, the final concert of the Choral’s existence.  I had no knowledge as to how or why Mary Jo sang with the Branscombe Choral yet for four months of her life, she rehearsed and sang with Gena Branscombe. 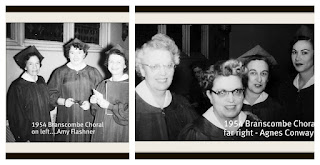 Over the past five months, Melissa and I have exchanged numerous e-mails. Though I could offer little background information, I did have pictures of Miss Branscombe and the Choral. In addition I have a few individual pictures of the Choral members from 1954 that I sent to Melissa. Together we hoped these photos would jog Mary Jo’s memory. Indeed! She recognized the picture of her beloved conductor, Gena Branscombe. 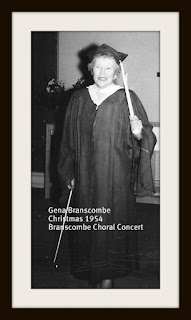 A copy of my CD was ordered in hopes that playing it for Mary Jo the songs would bring back memories of her singing past.

Finding this research, our on-going discussions and the Branscombe Choral pictures intriguing, Melissa Maize took it upon herself to write an article for the Good Samaritan News and Events online publication.  Mary Jo’s story of being a member of a renowned women’s chorus came to life.

Now it has been my turn to tell Mary Jo Steebner’s story…..a member of the Branscombe Choral.  There are no pictures of Mary Jo in the Choral scrapbooks though her name appears in the one program of December 1954.  We know little else about Mary Jo’s life and yet her most vivid memory is that of being a Branscombe Choral member. 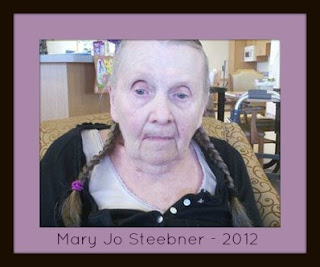 Mary Jo Steebner’s name appears on my website, this, my newest blog entry and in Melissa’s online article.  Our hope is that a friend or family member will search for her on the internet and find her name mentioned.  Then, maybe then, Melissa and her staff will be able to fill in additional details of Mary Jo’s life.

One thing is for sure, she will always be a Branscombe Choral member!
﻿ 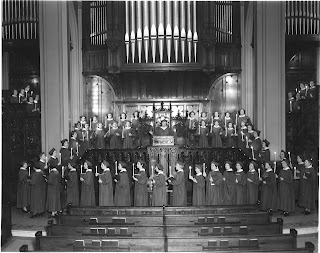