With my recent and ongoing research about Miss Branscombe’s life, I have had the pleasure of making new friends in Canada.   Little is known about Gena’s younger years as she did not keep diaries.  There are no records of her activities in the local school. 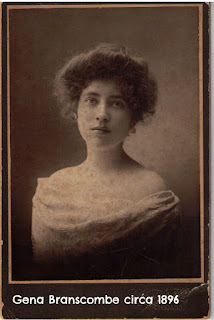 When I began making contacts in Picton, I found people who would then give me other names, phone numbers and e-mail addresses of someone who might have information.  One surprise was being in touch with one of Gena’s relatives!  All of these people were more than willing to help me in my quest for information from over 100 years ago.

One individual, who has been generous beyond what words can express, was willing to make trips to historical societies where their records are not online.  I have received copies of pictures, newspaper articles, family lineage charts, letters and much more.  One cannot offer enough “thank yous” to my new found Picton friends for their help.

At the same time, Gena’s grandson, Roger Phenix, has also been digging through the family archives trying to find physical items that may answer my myriad of questions.  Over the years, Roger has provided me with a treasure trove of items, many of which have appeared in my blog postings. 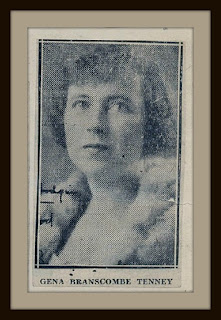 Two days ago, Roger sent me a copy of a page from a diary.  According to Roger, the book contains quotes from poems, speeches by royalty and hymns.  This particular page is dated Sunday, July 13, 1919.

In January of 1919, Gena and her family suffered the death of their third daughter, Betty.  She died of the influenza outbreak of that year.  June 1919, Gena gave birth to her fourth daughter, Beatrice.  One could say that the year 1919 had extreme lows and highs for the composer.

What may be surmised as a meditative mood or reflection, Miss Branscombe wrote on the top of the diary page:

An “Artistic Creed” written at a time of loss and new life.  Great creativity was in her soul at this time for Miss Branscombe began composing her largest work ever, “The Pilgrims of Destiny”, a dramatic oratorio which would win her numerous national composition awards.  Working through grief, attending to her three daughters......composing was her “…..potent force(s) for regeneration operating on the earth.” 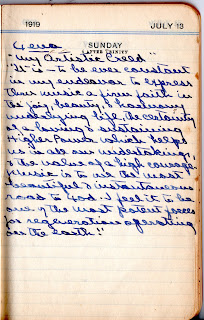 Posted by Kathleen Shimeta at 4:29 PM No comments: