﻿
﻿
The Elusive Arthur P. Schmidt
Gena Branscombe's music publishers were numerous and among them was Arthur P. Schmidt of Boston, Massachusetts.   In  my January 2011 blog entry, I wrote the following paragraphs about him.....

"German born Arthur Schmidt (1846-1921) was a trailblazer for American composers and in particular American women composers.  In my mind and opinion he broke down barriers, sought out potential that could be developed into the brightest and best.  He proved that the word composer had no gender bias to it….a composer is a composer whether man or woman!

What I have found most interesting about Mr. Schmidt is the personal interest he took in his composers.  At the Library of Congress in is the entirety of his business records.  There are ledger books for sales of each composer’s works, royalties paid, copyright filings, renewals and expirations, inventory listings, files with each individual’s contracts, business documents, pictures of composers, their children, families and concerts where they performed, correspondence from each composer immaculately filed by year, and original scores with the copies of each piece of music the company published.  This collection is the history of one of our country’s leading music publishers.

After reading the above, one could easily question "elusive"?  Arthur Schmidt, elusive?  Not really, yet amidst all of his business papers, there was not one photograph of Mr. Schmidt.  An online search brought forth no photos of this important business man from the world of music publishing.

Enter into my life, Linda Johnson from the state of Washington.  She found my website and blog where I had written about Mr. Schmidt, her great grandfather.  Linda wrote me an e-mail and offered to send me a photo of an elusive music publisher from the early 20th century!  Now, the much wanted image of Mr. Schmidt makes him no longer elusive!   Thank you Linda and we will have great discussions in the near future. 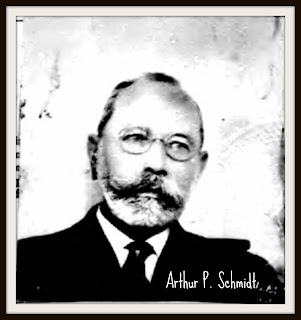 Posted by Kathleen Shimeta at 11:24 AM No comments: