“Christmas Festival ~ MacDowell Club of Mountain Lakes”  -  a green program held together with gold colored thread.  Delicate and fragile inner pages spell out a concert given by the MacDowell Club chorus conducted by Gena Branscombe.  The concert was presented on Tuesday evening, December 20, 1932 at 8:30 PM at the Community Church House.   The performance was given nearly 85 years ago during the height of the great Depression. 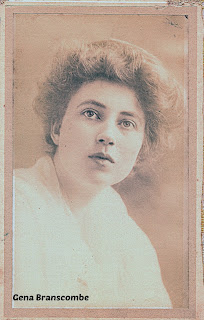 Established in 1896, MacDowell Clubs formed to honor American composer, Edward MacDowell (1860-1908).  At the height of their popularity there were 400 such clubs across the United States.  In the ensuing years the number of clubs has dwindled to only five remaining clubs; Mountain Lakes, New Jersey being one of them.

The MacDowell Clubs were community organizations where lectures were presented by renowned people of their day, concerts of piano or vocal literature were performed, some chapters established their own symphony orchestras as well as choruses.  Like the Mountain Lakes MacDowell Club, most often the clubs were for female members only though a few had male members.  Individual clubs maintained their financial backing of the MacDowell Colony in Peterborough, New Hampshire.

Miss Branscombe along with her husband and three oldest daughters moved to Mountain Lakes, New Jersey in 1922 residing there until 1924 when they returned to New York City.  It was in the Fall of 1922 when she was invited to conduct the MacDowell Club chorus.  She held that position until 1943 when World War II gas rationing prevented her from driving to Mountain Lakes.

Two of the members of the MacDowell Club chorus, Emma Davidson and Madeleine Davis, went on to become charter members of Gena’s Branscombe Choral in New York City.

In my possession now is a MacDowell Club of Mountain Lakes Christmas concert program from 1932.  The original owner of this program was most likely a member the Mountain Lakes Club and its chorus.  A cherished memory of making music with Gena Branscombe, she held onto this program for nearly 85 years.

Posted by Kathleen Shimeta at 12:22 PM No comments: