Honored as a leading women composer, conductor and pianist of her day her earliest initiation came in 1925 as one of the first Honorary Members of Delta Omicron International Music Fraternity, a professional women’s fraternity.

At their 1941 convention held in Edgewater Gulf, Mississippi, Zeta Tau Alpha initiated Gena as a Grand Chapter Initiate/National Honorary Member. This fraternity was founded in 1898 at the Virginia State Female Normal School. Still going strong today, they are advocates for breast cancer awareness through the Susan G. Komen Foundation. 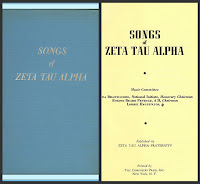 Recently a 1952 edition of the Zeta Tau Alpha Song Book came into my possession. The song book is dedicated to Gena Branscombe, distinguished American Woman Composer. On the title page she is listed as one of three people on the music committee.

In the foreword she is cited as having “edited every song published, composing accompaniments, revising words and music, harmonizing and arranging, and in all ways making the songs more singable and more useful for chapter singing.” 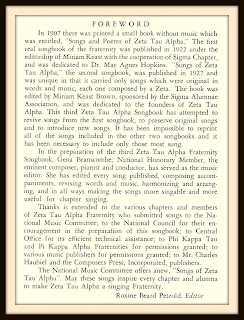 Obviously Miss Branscombe did not take these honorary fraternity memberships lightly and dedicated herself to being of service to them.
Posted by Kathleen Shimeta at 3:28 PM No comments: