An angry graduate student ….a composition major at the Hartt School of Music……the year 2001. What could possibly anger someone who is studying music and composing at a fine music school?

Not one women composer was represented on the school’s concert programs whether it be chamber music, choral, piano, orchestra or instrumental …..not one woman composer’s music was being performed and that was unfair and wrong. Anger…..now how to turn that anger into action and create a showcase for women composers.

Meet Heather Seaton who declared, “I will go on this journey to found a women composers’ festival.” With not a penny in her pocket to pay performers, print programs, for publicity or even to hire someone to manage her festival, Heather set forth over the next nine years growing her Women Composers Festival of Hartford into a celebration honoring music of women of all ages. The underdog, unknown and accomplished composers, senior citizens and a high school student now would have a venue for a performance of their music. Her festival would be all inclusive.

So what has this to do with Gena Branscombe? A women composers festival is a perfect place for my one-woman show. Having read about Heather’s festival, we submitted our publicity packet asking for consideration. Months passed, then one day came an e-mail from Heather expressing interest in my show and asking if Gena had written any orchestra and instrumental works! More on this….first a bit of the history of the festival.

Starting with six graduate student women composers, Heather and her colleagues gathered that first year during March, Women’s History Month, to host a 12-hour event that started at 10AM and ended at 10 PM. Together they presented lectures and concerts showcasing women’s music, then to end the day, the student composers at Hartt School of Music sat in a room and played their own music for one another. There was a sense of empowerment and accomplishment. The overall attendance at that first festival was poor but the talent and effort proved Heather’s journey for knowledge and equality of women’s music was set on track. 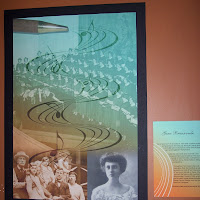 For the first seven years of the Women Composers Festival of Hartford all work was done by volunteers, for the love of promoting women’s music. Heather and colleagues approached the music school, asking them to include women’s music on recital programs, in classroom lectures, as well as attending the festival’s concerts and having the students write reports of the Festival’s presentations for credit. What an asset this festival is for a major school of music! Faculty member and voice teacher Susan Mardinly, a proponent of composer Barbara Strozzi, became the mentor and advisor for the festival. Each year she stood by Heather and her colleagues as they worked to develop a festival equal to their dreams.

More importantly, the festival grew from the one-day event, to multi-day, then into three weeks of concerts, workshops, and discussions. From student women composers at the college, the festival expanded to include local Connecticut composers, contemporary and historical women nationwide.

For the March 2008 festival, Heather, for the first time, was awarded grant money from the University of Hartford’s Women’s Education and Leadership Fund to help expand her festival. That year it grew to be international. Women composers Sylvia Goldstein, Sebastiania Ierna of Italy, Adriana Figueroa Mañas – an Argentinian mother of 2 and a self-taught composer, and Hasu Patel, lecturer of Indian music and sitar artist were featured. Performances of their music were offered, lectures and discussions given. According to Heather, not one of these women was a diva, all were willing to help where needed and they were grateful for the opportunity of being at the festival.

Heather and I met in New York City in late Fall 2008. Her curiosity about Gena Branscombe’s instrumental and orchestral works led us to the New York Public Library for the Performing Arts at Lincoln Center. In the Special Collections department where Gena’s music is held, we were able to peruse and study all of her instrumental scores. Heather’s vision was to expand the festival’s reach from instrumental, piano, choral and vocal works to now include orchestral works. One small problem, Gena’s orchestral works were in manuscript and would need to be entered into a computer for accurate parts and a conducting score. Copies of selected scores were made and Heather was off to Hartford to plead with music students to enter the scores into FINALE. Plead she did and students came forward, willing to help her. 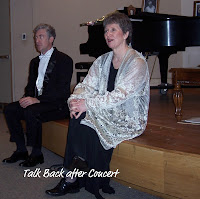 The 2009 Women Composers Festival of Hartford featured two days of Gena Branscombe’s music….a mini Gena festival! On Saturday, March 7th, Martin and I performed Life! Love! Song! A Visit with Gena Branscombe twice. In attendance at the matinee was Roger Phenix, Gena Branscombe’s grandson and at the evening performance was my dear friend and colleague, Laurine Elkins Marlow, who surprised all of us by flying in from Texas. After each performance we had a “talk back” where audience members were able to ask questions of us. My favorite question came from grandson, Roger. “How is it that you never had the opportunity to meet my grandmother, yet you have captured her completely?”

On Sunday, March 8th the entire afternoon’s concert was devoted to a Gena Branscombe Tribute featuring the Festival Chorus and the first Festival Orchestra, made up of students from the Hartt School of Music. “American Suite” for French Horn and piano, “Procession” from The Quebec Suite for trumpet, piano and organ, “Maples” from Youth of the World for chorus and orchestra; and “Just in the Hush Before the Dawn,” a song with orchestra, were all performed. Three of the students who had edited and transcribed Gena’s music from her manuscripts had the opportunity to conduct their score. Heather conducted the orchestra and myself in the song. 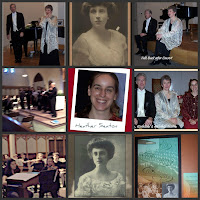 It is probable that well over 50 years have passed since any of these pieces have been performed. Sitting in the audience one heard Gena Branscombe’s instrumental, orchestral and choral music come alive in the 21st century. I know she would have been thrilled to hear her distinctly early 20th century sound that harkens back to clear and romantic melodic lines. Her own lush harmonies and scoring of instrumental colors made for ear catching textures. She would have been thrilled!

Gena’s grandson, Roger Phenix, spoke to the audience after the concert expressing his thanks to Heather, the Festival and all the performers for bringing his grandmother’s music alive once again. Laurine Elkins Marlow spoke about her years working with Gena, getting to know her and the impact her life had on the world. Now Gena’s music was being heard as she intended it to be.

The 2009 Women Composers Festival of Hartford marked Heather’s final year producing the festival. She had lived her dream of promoting women composers of all levels. Her contribution to the Hartt School of Music and the music world at large is invaluable. In her years as leader of the festival, she put forth over 100 women composers and had their works performed and recorded for posterity. Think about it….100 composers……100 women composers of all levels of accomplishment. Heather put her anger to good use turning it into positive productive results. At the end of nine years running the festival, Heather was receiving requests from women composers in China to have their works considered for performance and there was a request from Croatia. Do a search on Google for Women Composer Festivals and the first name that appears is Hartford….Heather’s festival. From a dream to reality…..from local to international….Heather made it work.

In 2010 Heather turned over the management of the festival to Daniel Morel and it is still going strong. 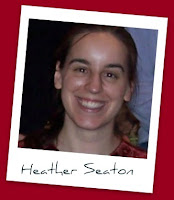 Thank you Heather for making your dream come alive and for helping women past and present have a venue for their music. Now Heather's time was going to be devoted to her loving husband, Scot, her dear son, Gavin, and composing. Thank you Heather!
Posted by Kathleen Shimeta at 1:21 PM 1 comment: