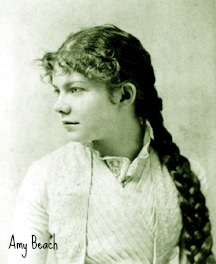 Mrs. Amy Beach was born Amy Marcy Cheney in Henniker, New Hampshire in 1867 and became Mrs. H.H.A. Beach in 1885 when at the age of 18 she married the famous physician, Henry Harris Aubrey Beach.  She was a child prodigy on the piano making her concert debut at the age of 16 in Boston.


Imagine my surprise when I first met Gena Tenney Phenix in 2000 and asked her if during her childhood had she ever met Mrs. Beach?  Her response was, "Oh, you mean Aunt Amy?  No, I do not remember meeting her though I know she was in our home when we lived on West 82nd Street."  Aunt Amy? ... this famous woman composer and performer was called Aunt Amy?


Little did I know that during her lifetime as a mentor to women composers and performers, Mrs. Beach became known as " Aunt Amy" for she was their principal role model, a caretaker, pathfinder and advocate.   Her "nieces" were members of the Society of American Women Composers, National Federation of Music Clubs and the National League of American Pen Women. 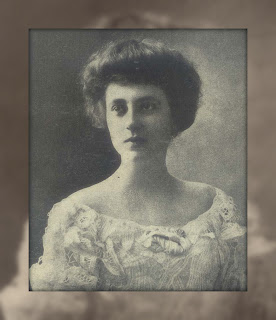 Gena Branscombe and Amy Beach had personal lives that were quite dissimilar.  Gena was a mother with four daughters whose musical career was woven into the fabric of her family life.  She composed while her husband took the girls to Central Park.  Gena's husband, John Ferguson Tenney, was a strong supporter of his wife's musical  profession.  Within her career as a pianist and composer, she became a conductor of choruses.


Amy Beach was a concert pianist and composer.  When she married Dr. Beach, her husband insisted she not accept payment for her recitals and she even curtailed her performing appearances.  She was encouraged to compose though no formal composition lessons were taken.  Upon her husband's death in 1910, Mrs. Beach's career blossomed with travel to Europe and across the United States concertizing and composing.


Professionally these two women composers and performers were linked by their leadership roles and memberships in the National League of American Pen Women, the Society of American Women Composers, the National Federation of Music Clubs and their publisher, Mr. Arthur P. Schmidt of Boston, MA.  Their friendship and musical goals grew out of these associations.


In the early 1920's both Mrs. Beach and Gena became members of the National League of American Pen Women.  A Composers' Unit was organized and Mrs. Beach was elected chair.  This was the first group of women composers linked to a major organization in the United States.  Women composers were considered second rate musical citizens and their determination to move forward to change that image is commendable.  The NLAPW made it possible for these women composers of the day to support one another and attend performances of their works. 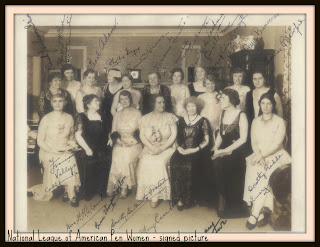 Among the other women composers who joined the NLAPW were Pearl Curran, Mary Turner Salter, Lily Strickland, Harriet Ware and Mary Howe.  Their compositions were performed at the League's meetings in late April 1924.  The Music Unit later presented the American Women Composers First Festival of Music at the Women's City Club of Washington, DC.


Because of their active involvement and leadership for the NLAPW and their individual talents, both Gena and Amy were honored as outstanding members.   In 1929 the NLAPW awarded Miss Branscombe their National Best Composition of the Year prize for her oratorio Pilgrims of Destiny and in 1934 Mrs. Beach was presented  with a medal for her work in music.


As an outgrowth of the NLAPW's Composer Unit, Amy Beach, Gena and 18 other women founded the Society of American Women Composers.  Mrs. Beach proclaimed "This Society may come to mean much in the future of American music, if we go about the work in the right way."  In October 1925, Mrs. Beach was elected President.  Gena succeeded her as President in 1928.  Setting high membership standards, new women composers were recommended based on their personal and professional qualifications.  Once a majority approval was made by the Board, an invitation for membership would be granted.  Concerts were presented at various venues in New York City including Chickering Hall and Steinway Hall.  The Society disbanded in 1932, yet during its seven short years of existence, the members' music was heard and reviews in the papers kept them in the forefront of the music world.


The Daughters of the American Revolution  figured into both Amy Beach and Gena's professional lives.  In 1927 the New Netherlands chapter of the DAR purchased a place for Gena's  name to be perpetually inscribed in the new Constitution Hall’s Honor Roll in , DC.  Her oratorio Pilgrims of Destiny had won her this most prestigious honor.    Amy Beach was proposed for membership in 1926 by the Hillsborough, NH chapter.
What drew these two women even closer was their publisher, Mr. Arthur Schmidt of Boston, MA.   The Library of Congress houses the entire Schmidt collection of letters, business files and photographs.  Letters from Gena and Amy to their publisher are held in this collection.  They mention one another frequently in their correspondence to him.  They requested complimentary copies of their songs or choral pieces to be sent to the same singer or conductor.  One young conductor of the time was a recipient of both women's choral works.....the young Robert Shaw.   To be published by Mr. Schmidt was an honor and he took great pride in promoting women composers of the day.
Founded in 1898, the National Federation of Music Clubs was and continues to be a leading organization in the promotion of musical and cultural experiences in communities through sponsorship of concerts and educational programs. 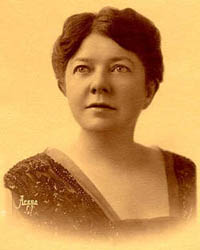 Mrs. Beach composed choral works for the women's choruses of the NFMC.  Her piano concerts were sponsored by local chapters and she attended meetings of those chapters.  When at these gatherings she mentored and guided young women composers and performers.   She presented piano recitals on the national level at NFMC annual conventions.  Her renown as a dedicated and loyal member is exemplified when NFMC choruses and clubs changed their  names to the Beach Choral Society or the Beach Music Club.  In addition, Amy won awards for her music compositions. 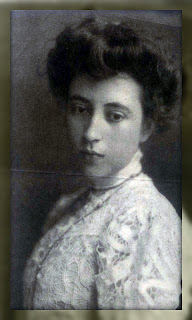 Gena Branscombe was also an active, dedicated member of the NFMC.  She conducted women's choruses for local chapters across the country.  Miss Branscombe was Chairman of American Music for the New York State Federation of Music Clubs and eventually a member of the Board on the state level.  Her leadership role was that of conductor, organizer and guest speaker.  The NFMC honored her by sponsoring the first complete performance of her oratorio, Pilgrims of Destiny in Plymouth, MA.


Memberships in clubs and being the recipient of awards from those clubs does not a leader make.  Yet, I believe that Mrs. Amy Beach and Miss Gena Branscombe left their marks on each of the women's clubs of their day.  By their dedication to the promotion of American women composers, they changed the course of music history and its women.  They attended meetings, upheld their high musical standards, created performance opportunities for themselves and fellow members.  They sought out women on the local level to sing in choruses, play music for one another at club meetings and encouraged those local members to be active in their own communities.  They were leaders by example and their  own music.


In their day, women composers' music was heard at women's clubs and rarely on the main stages of American performance spaces.  Within their world, they strove to make a better place for women composers and performers.  In my opinion, their work and dedication has made a difference for us all. 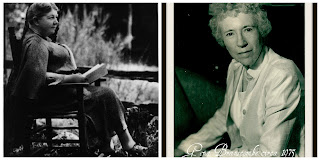