The Gena Branscombe Project has announced their 2022 scholarship winners.  We congratulate these talented musicians and wish them all the best as they move forward with their careers. 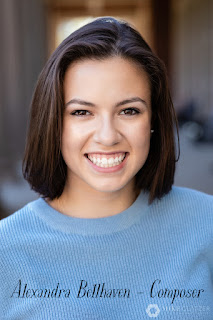 The Gena Branscombe Project has awarded its 2022 Composer scholarship to Alexandra Bellhaven.

In addition to being a composer, Alexandra is a musical theater writer, pianist, and conductor with a passion for the art of telling stories. She is a current student at Berklee College of Music in Boston where she studies Film Scoring and Composition with minors in Musical Theater writing and conducting.

Alexandra’s niche is telling the hidden stories that affect a large population of people; the stories of the silent majority. Whether that is the stories of addiction, or the transformation of love in all forms, Ally seeks out art that generates the feeling of community in a unique way. When not storytelling, you can find Ally training for the Chicago 2022 marathon, 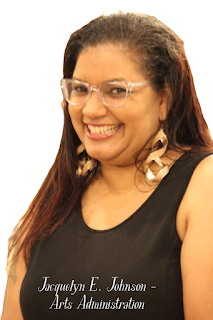 Jackie’s love of music began when she her father encouraged her to auditioned for the Uniting Voices Chicago (formerly Chicago Children’s Choir).  She performed with the choir throughout the city, Orchestra Hall and at Nelson Mandela’s home in South Africa.  She is an alum of the group, later joining the organization as Program Assistant, Program Associate, Program Manager and became Director of Citywide Programs.

Presently Jackie is working on her Bachelor of Arts in Interdisciplinary Studies; Multi Cultural Arts Administration at the University of Massachusetts- Amherst, University Without Walls.  One of her goals in pursuing this specific degree is her ability to bring academic expertise and experience to her work at Chicago Children’s Choir. 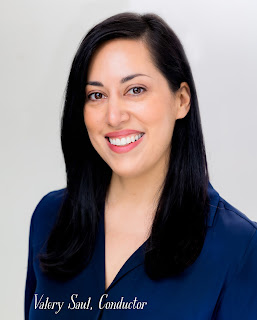 The Gena Branscombe Project is proud to award its 2022 Conductor’s scholarship to Valery Saul.

Valery won 2nd place at the Denver Philharmonic International Conducting Competition and was selected to participate in the Domaine-Forget Conducting Academy with Yannick Nézet- Séguin and Branwell Toveye.

Known for her inclusivity in programming she formed concerts that celebrated the Hispanic culture of her community and advocated the new music of living composers that must be heard in our concert halls.

The Gena Branscombe Project will begin accepting applications for the 2023 scholarships on March 8, 2023!

Posted by Kathleen Shimeta at 7:45 AM No comments:

At the Postern Gate

What could singer Oliver Steward, Metropolitan Opera star tenor, Frederick Jagel, and sports announcer Graham McNamee possibly have in common?  First, they are all American born, second, the obvious answer would be a connection to Gena Branscombe.  And, yes, all three of them sang her song, “At the Postern Gate” from her song cycle, “Songs of the Unafraid.” 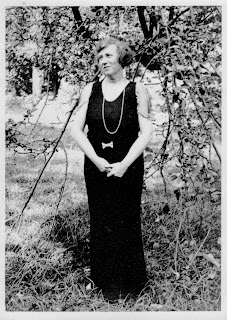 In Gena’s November 14, 1928 letter to Mr. Austin at Arthur P. Schmidt publishing, she mentions that Oliver Steward had sung the song at a private musicale and at the Plaza Hotel.  She happened to meet Mr. Frederick Jagel of the Metropolitan Opera who told her he had also sung the song at a private musicale and would be singing it over the radio in January.  In what seems to be a whimsical after thought in her letter, she asks if Graham McNamee singing that song on the radio had “stirred up a little life!”

There is no information about Oliver Steward on the internet.  I will surmise he was a New York City based singer who performed recitals and oratorio. 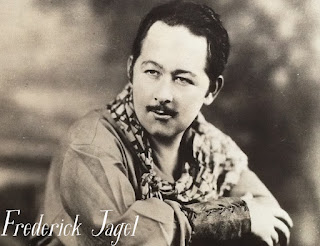 Mr. Frederick Jagel (1897–1982) has an interesting life.  He was born in Brooklyn, New York in 1897.  He began his vocal studies in New York City then continued his studies and began his performing career in Italy.  Using the name Federico Jaghelli, he made his opera debut in 1924 as Rodolfo in La Boheme in Livorno.  He returned to the United States to make his 1928 debut at the Metropolitan Opera singing the role of Radames in Aida. He sang 217 performances of 34 roles over his 23 years at that famous house!  He must have given time in his operatic career to perform recitals or sing art songs for special occasion at private parties and on the radio.  Thus, this was his connection to Gena.  When he retired in 1950, he began teaching.  He became Chairman of the Voice Department at the New England Conservatory of Music in Boston. 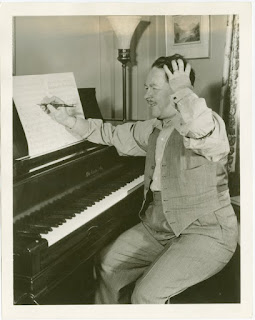 The mention of Graham McNamee, the sports announcer, is an interesting one.  McNamee was the sports announcer who created “play-by-play” announcing of baseball games which he did for the 1924 World Series.  He had little knowledge of baseball yet had a knack for describing what he was seeing which captivated his radio listening audience. 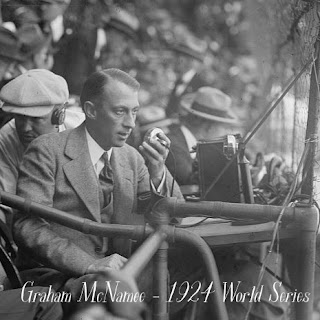 McNamee had an early interest in becoming an opera singer which was why he moved to New York City.  On his way to jury duty, he stopped into WEAF radio station to see if he could get an audition as a singer.  There was no work for singers, but, he was asked to speak into the microphone as an audition.  He was immediately hired as a staff announcer.  His announcing career blossomed through sports, reporting on presidents, political conventions and he appeared in movies. 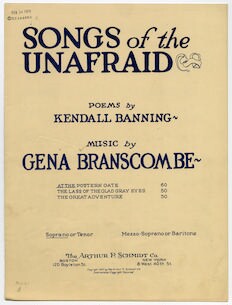 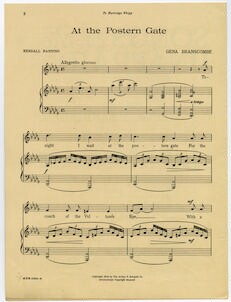 In the 1920s Graham gave a recital at Aeolian Hall in New York City.  The reviews were very good yet he would find little work singing in churches and giving concerts.  Now….did he happen to sing a few of Gena’s songs on that concert?  Possibly and there are no Aeolian Hall  archives to research.  Gena does mention that he sang “At the Postern Gate” on the radio.  Was the singing of the song during one of his regular broadcasts to entertain his followers or as a solo for a radio station concert?  It’s a swash-buckling tune with lyrics by poet Kendall Banning.  In the era, it would have been considered a “man’s song.”  With his fame and renown, singing “At the Postern Gate” on the radio would have created interest in purchasing the song, sales would have increased and Gena would receive increased royalties.

Posted by Kathleen Shimeta at 9:22 AM No comments:

With thanks to Matt Spangler for inviting me to be interviewed for his podcast “The Ladies Speak.”  Speaking about Gena Branscombe for over 3 hours was a new one for me.  Guided by Matt, it was easy.  Damali Willingham, The Gena Branscombe Project 2020 Composer scholarship winner, joined the session to speak about the experience of arranging and conducting Gena’s “Festival Prelude.”  What a pro Damali is! 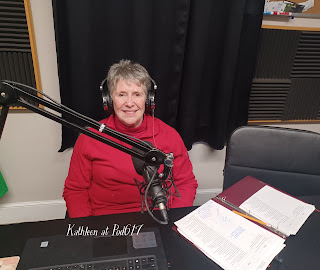 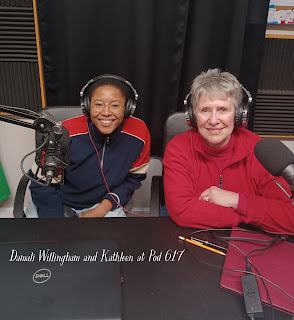 Thanks to Dave at Pod617 studio who made me feel comfortable and at ease. Forgive my poor photographs of Dave’s wrist band advertising, but, it is very creative and I had to share it.

The podcast will be posted on “The Ladies Speak” website in early 2023.  Of course, we will post it as soon as it is available.

In the meantime, the recording session is “A WRAP!”

Posted by Kathleen Shimeta at 1:13 PM No comments:

The Santa Clara, California Chapter of the National League of American Pen Women invited me to give a presentation about Gena Branscombe’s involvement with the Pen Women.  On Saturday, November 5th, I presented my speech.  I offer my thanks to Luanna Leisure, President of the Chapter, for the invitation and organizing the meeting and to the members and guests who were an engaged audience.

Below is the link to the video: 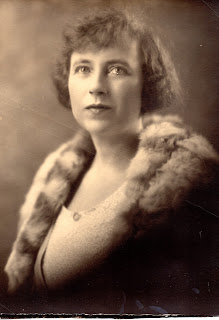 Posted by Kathleen Shimeta at 8:07 AM No comments: