Research on the internet is a luxury as one does not leave one’s home.  Enter your inquiry into Google and the information from the far reaches of the world’s libraries or other sources is right in front of you.  What you may not find on the internet then may cause you to venture out to an actual library where articles and clippings may not have found their way to the internet.

Small historical societies are a treasure trove of information.  Scrapbooks, articles, pictures and personal items have not been scanned to the internet.  Time, money and expertise may have prohibited these societies from sharing their antique gems. 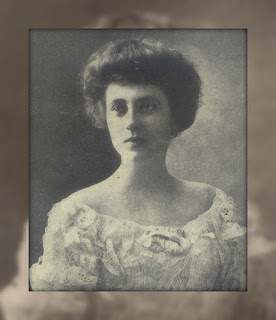 Several years ago through connections in Picton, Ontario with Gena Branscombe’s family members and friends, I was put in touch with John D. Lyons.  John is a researcher with his own projects.  He kindly added researching Gena’s younger years to his list of things to do.  He has passed on to me census filings, pictures of Gena’s father’s pharmacy and home, articles about the family and more.

When Laurine Elkins Marlow interviewed Miss Branscombe for her dissertation, Gena mentioned she had participated in local Picton theater productions.  Thanks to John Lyons there is now proof of her being in an amateur opera company play.


A local historical society holds the scrapbook of Josephine Annatje Reynolds*.  As John was researching for something else, he found on page 68 of the scrapbook an article from the Picton Gazette from pre 1896.  No exact date is given.  The four act comedy, "School," was performed by the amateur opera company of Picton.  In the cast was Miss Gena Branscombe.  Held at the Bijou Theater, the “theatrical treat” was a success because of the “beauty and talent” of those in the cast. 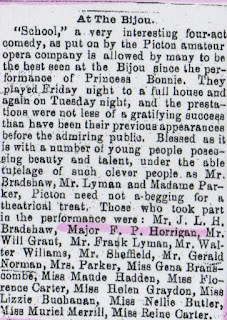 Miss Gena Branscombe, pianist, composer, conductor and leader of women in music was indeed a thespian.

Thank you to John D. Lyons for his continuing research on the life and music of Gena Branscombe.  You have found some delightful treasures. 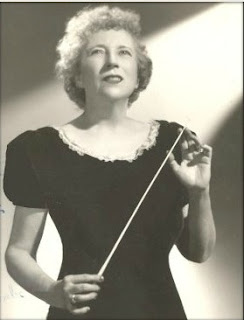 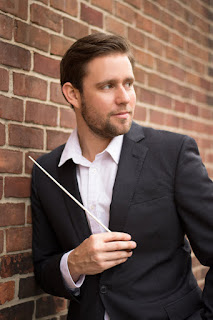 
Posted by Kathleen Shimeta at 5:34 AM No comments: