Arthur Branscombe, nephew of Gena Branscombe, passed from this life at age 93 on February 10, 2012. Arthur and his family were one of the surprises of my Gena project.

When I wrote my last blog, my opening sentence was about surprises that have come my way while working on my Gena project. As I said, the surprises are not daily or weekly yet they arrive and are a joy.

In mid 2011 I received an e-mail from Allison Branscombe…..another Branscombe yet someone I had not met nor had I known of her. Allison’s opening sentence said she was Gena Branscombe’s great niece and that her father Arthur, age 92, was Gena’s nephew. This was a surprise! 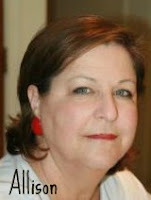 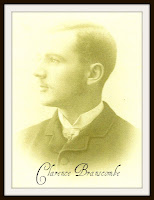 Over the past 12 years I have often wondered about Gena’s family especially her brother Clarence who was born August 15, 1871. He was 10 years older than Gena. I knew little about Clarence and wondered if he had children, and if he did, would there be a family connection for me to contact. Then, came Allison’s e-mail and a whole new connection to that side of the Branscombe family began.

Allison and I quickly scheduled a phone conversation so we could share our Gena stories. I listened to her side of the Branscombe family history and much, much more. Speaking for over 1 ½ hours our conversation flowed as if we had known one another all of our lives.

During our discussion I soon realized that it was important for me to interview Allison’s father, Arthur. I needed to hear his story, his relationship with his father and his Aunt Gena. On September 12th and 20th, 2011, I spent one hour each of those days speaking with Arthur and his lovely wife, Carla.

From my questions and reading, little seems to be known of the relationship between Gena and her brother Clarence. He sang in a church choir as a young man, attended military school, worked as an engineer, then attended seminary and was an assistant pastor at the Cathedral of Saints Peter and Paul in Chicago. Clarence returned to his first career, engineering, working for the United States government designing buildings around the country.

Clarence married his second wife, Evelyn Perkins Branscombe, in either 1916 or 1917. They had two children, Arthur, born in 1918 and his sister Marge, born 1921. Their family life was one of continuous relocation for Clarence’s career.

By the age of six Arthur had lived in South Carolina, Texas, Georgia, Arkansas and in Los Angeles where his father built the Veteran’s Administration hospital. In 1926 the family moved to New York City where Clarence built the Customs House. And that same year was when Arthur and his sister, Marge, met their Aunt Gena Branscombe, her husband John Tenney and their cousins Gena, Vivian and Beatrice.

What Arthur remembered most about his Aunt at that time…..the wonderful apartment they lived in at 1 West 82nd Street. It was large, filled with dark, warm wood moldings, beautiful furniture and his extended family! Arthur maintained a life-long relationship with his cousin Gena Tenney Phenix.

Prior to his leaving for Africa during World War II, Arthur was in New York City. His cousin Gena Tenney Phenix invited him to the USO Show at the Broadway Tabernacle Church. This was the very show that her father was in charge of. (See my blog of July 7, 2011). At this party Arthur met his future wife, Bea Sutton. After the war he returned to marry her at the Broadway Tabernacle Church with his local Branscombe family in attendance. John Ferguson Tenney was Arthur’s best man. 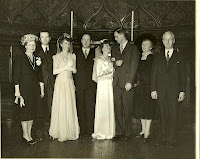 Bea and Arthur eventually moved to Colorado where he wrote for the Denver Rocky Mountain News and the Denver Post. He was a community activist and wrote passionately about education and racial divides. Bea died in 2000 and Art married Carla Henebry in 2003.

Arthur did stay in touch with Gena Branscombe and Gena Tenney Phenix until their respective deaths. His memories of them were warm and filled with laughter. He remembered hearing the Branscombe Choral on the radio and writing his Aunt about the performances. His notes to her are in the Branscombe Choral scrapbooks at the New York Public Library.

Back to Allison and the story continues……with her father, Allison met her great Aunt Gena while on a trip to New York City in the 1970’s. Wondering if musical talent had flowed through this side of the family, I found out that one of Allison’s nieces plays cello and another is a singer. The family musical genes are carried forth into the next generations.

Allison is a young adult book author. Her great Aunt Gena has been a source of inspiration for her and she is planning to write a book about Gena’s life and career. For young adults this will bring the history of a working mother and musician alive. A biography like this will afford young readers an in-depth look into her life 100 years ago. It is our plan to collaborate on this book. Our combined creative abilities should make this tome a great read!

A new Branscombe family connection yet I feel as if I have known these people for the past 12 years. They have been welcoming and thankful for my dedication to Gena Branscombe’s life and music. I look forward to meeting Allison, her sisters Kim and Meredith and Arthur’s wife, Carla. Thank you for reaching out to me.

And, for all of you my followers, there will be a young adult book about Gena Branscombe a few years down the road. Stay tuned!
Posted by Kathleen Shimeta at 11:54 AM No comments: