Any person in the arts will tell you that the one thing they would like for their career is to spend uninterrupted time creating their specific area of the arts whether that be sculpting, painting, writing, photography, film, graphic arts, dance, or composing music.   Time for creativity and developing our talent is at a premium for all of us as life gets in the way with jobs that support us, family crises or a million other details.  We dream of a place and an extended period of time that will allow us to be in our art; to practice and to create.

Such a place exists in the MacDowell Colony in Peterborough, New Hampshire.  When American composer and pianist, Edward MacDowell died in 1908, his wife, Marian, spent the next 48 years of her life creating and fundraising for his vision; an artist's retreat where people would enjoy the solitude of creative work at Hillcrest, a farm the couple had purchased in 1896.

Even before Edward's death, Marian transferred the deed of Hillcrest to the newly formed Edward MacDowell Association.  Among the Association's earliest financial supporters were former President


Grover Cleveland, Andrew Carnegie and J. Pierpont Morgan, each of whom believed that Edward MacDowell's dream should become a reality.

MacDowell did live to see the first Fellows arrive at the newly formed MacDowell Colony.  Among the original artists to be chosen in 1907 were Helen Mears, sculptor, and her sister, Mary Mears, a writer.


Marian MacDowell's determination and leadership to champion the Colony and to assure its financial stability became her life's work.  She returned to the concert stage giving lecture recitals of her husband's piano works thus raising funds for the continuation of his vision. According to Marian the most consistent financial support came from Women's Clubs, the National Federation of Music Clubs and professional music fraternities such as Alpha Chi Omega, Delta Omicron, and my own, Sigma Alpha Iota.  SAI, in 1916, provided the funds to build one of the artist cottages, known as "Pan's Cottage."

Initially 32 individual studios were built where artists spent their time working.  Breakfast and dinner are served in the main dining room and the artists sleep in the residential houses.  Residencies are from two weeks up to eight weeks.  Room and board are free. 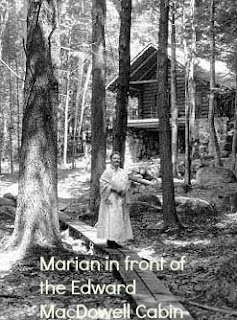 An outgrowth of the MacDowell Colony was the creation of local MacDowell Clubs across the country.  Not only did these clubs contribute sizeable donations to the Colony, they were a leading force in their local arts' scenes.  As well, MacDowell Choruses performed and produced concerts in their communities.  Many of these clubs and choruses still exist today.


Among some of the famous people who have spent time at the Colony are Leonard Bernstein, Thornton Wilder, Aaron Copland, James Baldwin, Alice Walker and Meredith Monk.  The MacDowell Colony focus is not about the famous people who come to work, it is about artists from all areas of the creative process, famous or not. 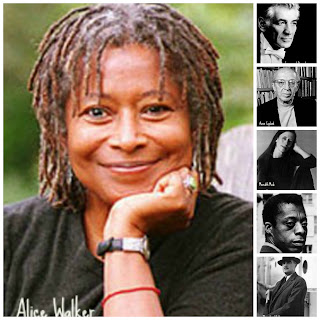 Life-long affiliations with professional groups were the building block of Gena Branscombe's career.  Her dedication and personal contributions to organizations was commendable.  Her association with MacDowell Clubs, chorus and Colony began as early as 1914 when her "Festival March" was performed at the MacDowell Festival in Peterborough, New Hampshire.  Edward MacDowell and Gena were both published by Arthur P. Schmidt and their works were performed on the same concerts for the American Composer's Festival. 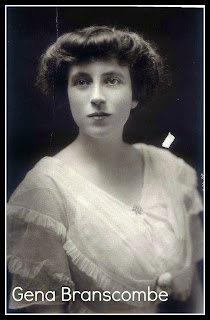 In 1922 Gena and her family moved to Mountain Lakes, NJ (see my blog of  July 2, 2012) and there she became the conductor of the local MacDowell Choral Club.  Even after returning to New York City, two years later, she maintained her leadership of the chorus commuting each week for rehearsals and then performances.  The chorus performed many of her compositions including "The Dancer of Fjaard," "Youth of the World," "Maples" and several choral arrangements.  Once World War II broke out, gas rationing forced her to resign her conducting of this group.  For over 15 years she shared her music and talents with the MacDowell Club and Chorus of Mountain Lakes!


In July 1945, The New Jersey Federation of Women's Clubs sponsored Gena's one-month stay at the MacDowell Colony.  A cherished dream to spend one uninterrupted month composing became a reality!  Her goals were to prepare her choral work "Coventry's Choir" for publication.  She completed work on the proofs of her songs, "Blow Softly, Maple Leaves" and "Annie Laurie" sending them off to her publishers.  She continued work on "Ancient Suite" and composed a song for a poem by one of her fellow colonists, Alfred Kreymborg.  The song was performed for the entire group of colonists.  Gena also worked on arrangements of choral works for her own Branscombe Choral.  A productive month, indeed!

Eleven years later in October 1956, Gena returned to the MacDowell Colony for another month of intensive composing.   This time her studio was the Sprague-Smith Studio. 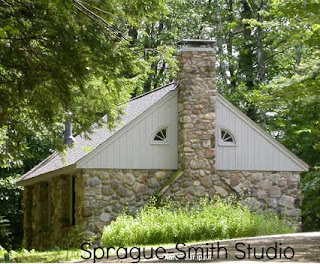 Her compositional output included work on "Thou Shalt Not Be Afraid," an orchestral suite "French Dances," and a set of choral dance suites with instrumental ensemble, "The Rigaudon of Old Provence" and "The Passepied of Brittany."    She wrote her own poetry for the choral dance suites.  Gena began work on the text for a Navy Hymn, "Arms That Have Sheltered Us" which she finished after returning home.


Her colleagues at the Colony this time were again Louise Talma, then, Ernest Toch, John LaMontaigne, Norman Vogel and Vladimir Ussachevsky.


In the January 1957 issue of the National Federation of Music Clubs magazine was an article authored by Gena. She wrote of the 50th anniversary of the Colony and the 100th anniversary of the birth of its founder, Mrs. Marian MacDowell.  Depicting in great detail the beauty of the Colony and its 400+ acres, she also portrayed her interactions with her fellow colonists and the work each of them were able to accomplish in the solitude of Hillcrest! 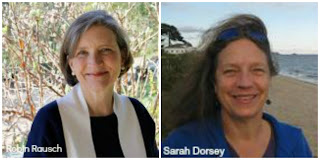 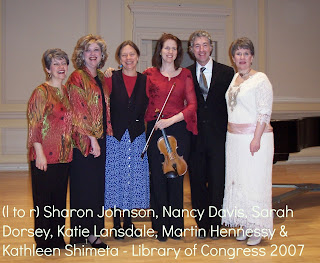 My own association with the MacDowell Colony was 50 years after Gena's published article.  In March 2007 Martin and I were invited to participate in a concert at the Library of Congress which celebrated the 100th Anniversary of the MacDowell Colony and the women composers of the Colony.  Martin and I represented Gena Branscombe's music.  Works by Louise Talma were performed by violinist, Katie Lansdale and her pianist, Andrew Hardley.  Piano Duo Sharon Johnson and Nancy Davis played Louise Talma's, "Four Handed Fun."  Elizabeth Brown's "Seawatch" was performed by Katie Lansdale.  Organized by Sarah Dorsey and Robin Rausch, the concert highlighted the importance of the Colony, its support of composers --- women composers.  Outside of the concert hall were displays of each composers' music held at the Library of Congress. 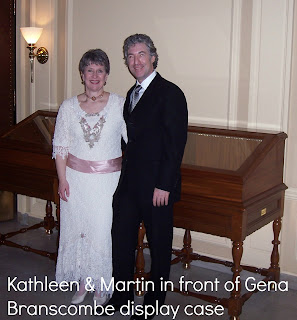 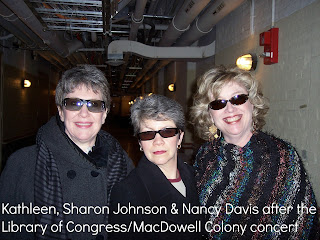 Three women composers, all MacDowell Colony Fellows, whose music echoed in the hallowed concert hall of the Library of Congress.  Their spirits reigned forth with thanks to the Colony for giving them time to create and develop their talent in solitude, just as Edward MacDowell had dreamed! 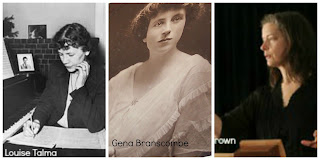 Posted by Kathleen Shimeta at 7:01 AM No comments: