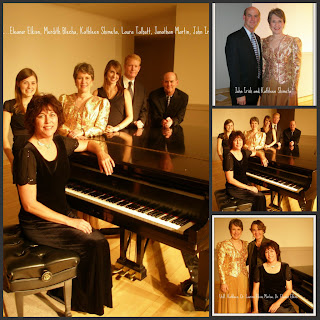 Performing my Gena Branscombe show is always a delight and something I enjoy doing. Yet, there are more facets to music making and I have tried to develop those interests and avenues of performance.

Imagine my surprise this past June when I met Dr. Eleanor Elkins, Assistant Professor of Piano at Angelo State University, who invited me to perform on a recital with her as accompanist and share the the program with the University's trumpet teacher, Dr. John Irish.


A return to something I love to do, perform art songs of various composers with poetry by the great writers, creating a mini drama in three minutes of a song. I love the creative process of finding composers whose songs blend together a story over the evening of a recital.

My usual way of researching is to pull music scores from my personal library, open each book, read through songs, search the poetry for a hint of a theme for the recital. I leave the scores open to songs and scatter them over my living room floor, arranging and rearranging the order of songs. I then omit songs, dig deeper to find another that would be more appropriate and eventually settle on the recital repertoire.
The recital at Angelo State University would be slightly different. Sharing the program with the Dr. Irish, I realized his repertoire would be American composers, Kent Kennan and Leonard Bernstein. Making the recital cohesive was important so American composers it was for me as well.


Immediately I included two melodic and touching songs by Richard Hundley followed by Four Songs of Jean Berger with poetry by Langston Hughes. Berger was German born and immigrated to the United States at the early stages of World War II. He and Langston Hughes met and collaborated on these songs over the telephone. These two great men understood the power of discrimination; Berger, a Jew forced out of Germany and Hughes growing up in the South facing Jim Crowe laws. What a group of Four Songs and a pleasure to cull the depths of their hidden meanings.
I did include five songs of Gena Branscombe, Canadian/American, with poetry by Arthur Stringer, Elizabeth Barrett Browning, Gena, Eichendorff (translation by Gena) and Canadian Katherine Hale. What a group.
Dr. Irish suggested we collaborate on at least one if not two pieces. Several years ago I performed Henry Purcell's "Ode on St. Cecilia's Day." There is one of those miracle mezzo arias with two trumpets. This time the mezzo gets to sing with trumpets and not the soprano. There also is a lovely short aria with violins. Well, Purcell is not American but his music is in English!


Not only would Dr. Irish be playing but he invited friends from Oklahoma State University to join us. Included were trumpeter Jonathan Martin, Cellist Meredith Blecha, Laura Talbott, violin and Daniel McCloud, timpani. What a group of wonderful musicians and it was a real kick to perform with them. Thank you for sharing your talents.
Dr. Laurine Elkins Marlow and her husband, Dr. William Marlow drove to San Angelo from College Station to attend the recital. I was able to introduce my friend, Laurine, to the audience and explain that she had worked with Gena Branscombe from 1975-1977.


Now, Dr. Eleanor Elkins! What a pianist, accompanist and musician! It was an absolute pleasure to work with Eleanor. She was prepared, willing to collaborate and unite us as two musicians making music as one. Thank you Eleanor.


In addition while in San Angelo I worked with the Musical Theatre/Opera Workshop students. They were in the process of staging scenes for an upcoming performance. A few days later singers from the two voice studios sang for me and I was able to critique them and add suggestions to their performances. What open, willing and alert singers they are. Thank you for sharing your talents with me.


Every job we get in the music business is a blessing as we are able to share our musical talent with others, grow from the experience, and meet other musicians in this our small world of music. Most important we can say we are working! Thank you Eleanor for this wonderful sharing of music!
Posted by Kathleen Shimeta at 11:43 AM