When I perform my lecture recital, “Gena Branscombe: Her Life in Poetry & Song” after singing the opening song, I begin speaking with the statement,

Here in pictures is Gena’s life with a little commentary. I trust this will explain my fascination and dedication with this woman composer from one hundred years ago. 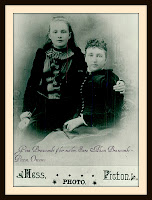 Gena Branscombe and her mother, Sara Alison Branscombe. The photo was taken in Picton, Ontario, Canada where Gena was born. Sara Branscombe was a poet and newspaper woman. Throughout her composing years, Gena set many of her mother's poems.....quite successfully!

Portraits of a young Gena Branscombe. Unfortunately there are no dates to these pictures yet look how gorgeous she was! 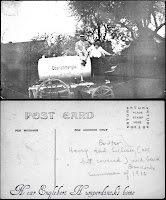 From the Summer of 1909 to June 1910 Gena along with her friend, Lillian Boulter, spent one year studying piano and composition in Berlin, Germany. During that time she had the honor of studying with the real Englebert Humperdinck. This picture was taken near his home. Imagine a woman traveling alone.....100 years ago. What spirit and what an inspiration! 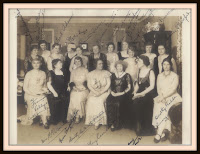 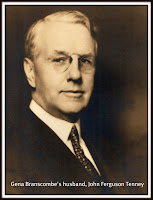 John Ferguson Tenney, Gena's husband. Originally from Methuen, MA, he was a lawyer. Gena and John met in Walla Walla, Washington where she was on the faculty of Whitman Conservatory. They were married in Picton, Ontario, August 1910. He insisted they live in New York City to further Gena's career. He was a dedicated husband and father babysitting his daughters so his wife could compose.

Gena Branscombe with her eldest daughter, Gena Tenney. Both mother and daughter were musicians. Gena Tenney went on to major in music at Barnard College, studied at the Royal Conservatory of Music in London and returned to New York City where she was head of the Music Department at Barnard. 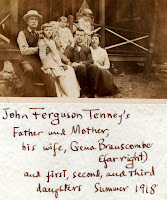 Gena Branscombe with her husband John Ferguson Tenney, his parents and their three daughters. 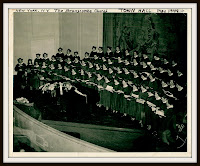 Spring concerts for the Branscombe Choral were performed at Town Hall in New York City. This photo is from 1949. 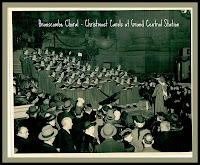 The Branscombe Choral performing Christmas Carols for the communters at Grand Central Station. An annual event for the Choral.

This picture taken in 1975 just two years before her death. She looks youthful at age 94.
Posted by Kathleen Shimeta at 1:30 PM