“Declassified: Women Composers Hiding in Plain Sight”.  What an interesting title for a blog written by Melissa Wertheimer, Music Reference Specialist, at the Library of Congress.  Click on the link below and read about Melissa’s first days working for the Library of Congress, finding a picture of five women composers with no identification.  Her search through the Library’s various collections to solve the mystery of the five women in the photo is intriguing.

The five women are (left to right):  Phyllis Fergus, Ethel Glenn Hier, Amy Beach, Harriet Ware and Gena Branscombe.  They were in Washington, DC having been invited to join the League of American Pen Women.  These five were the elite women composers of their day. 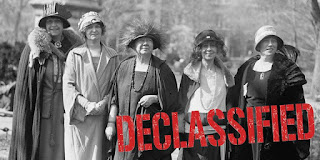 This past November, Melissa presented her research in a lecture also entitled, “Declassified: Women Composers Hiding in Plain Sight”.   When the Library of Congress announced the lecture, Dan and I decided to take a long weekend trip to Washington to attend the lecture.  Also included in that long weekend was two mornings of research for me at the Library of Congress and tourist time.

Entering the Music Division of the Library of Congress on Thursday, November 16th, my mission was to complete photographing Gena Branscombe’s letters to her publisher Arthur P. Schmidt.  I had begun the process of photographing her letters a year earlier but ran out of time to complete the project.

At the help desk, I called up the second box of her letters which included 18 folders of her correspondence organized by year.  When the box arrived, I decided to re-read the 1923 and 1924 letters in the first two folders.  I wanted to remind myself what was transpiring in her life and musical career.  A letter dated February 18, 1924 held quite a surprise.

Written on two 4x6 cards, front and back, it is sides 3 and 4 of the letter that are most important.  As a P.S., she mentions, 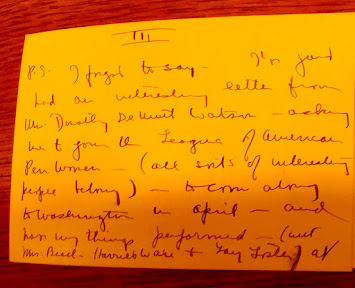 “I forgot to say – I just had an interesting letter from Mrs. Dorothy DeWitt Watson – asking me join the League of American Pen Women – (all sorts of interesting people belong) – to come along to Washington in April – and have my things performed – (with Mrs. Beach, Harriet Ware and Fay Foster) at the convention.  Tea at the White House – a luncheon with President Coolidge presiding.”

“Won’t it be fun.  I’m as thrilled as a child at Christmas!   GBT”
(Gena Branscombe Tenney) 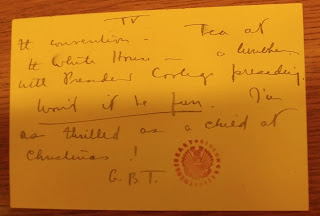 There in my hand was additional proof of why the women in the photograph were together and why there were concerts of their music.  I asked Melissa Wertheimer to join me at my research desk and then showed her the letter.  We stood in silent surprise.  Here was another display item to support declassifying women composers in plain sight.

Two days later, Melissa presented her lecture with written historical commentary by men about women composers, the composers’ sheet music, pictures and Gena’s letter.  Congratulations, Melissa.  Job well done!  As with any research, it is an open ended project and I know Melissa will continue to dig deeper for facts about these five wonderful composers! 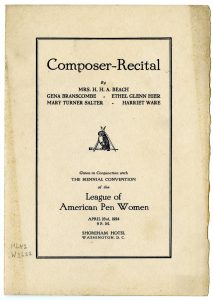 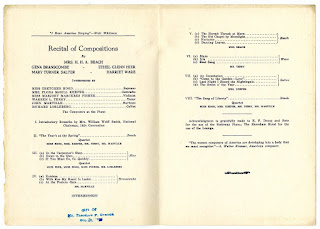 By the way, during our government’s shutdown, the Library of Congress is open for business.  Go search through the astonishing collections our nation’s library holds.

Photograph credit:  All photos in this blog entry are in the Library of Congress, Music Division.

Posted by Kathleen Shimeta at 11:48 AM