The great German composer, Richard Wagner (1813-1883) wrote challenging and complex operas including” Parsifal,” The Ring Cycle,” “ Lohengrin,” “ Die Meistersinger, “ “Tristan und Isolde”  and many others.  The vocal demands on singers who perform roles in these operas are great.  The vocal lines are long and complicated supported by an orchestra of 100 musicians.  Wagnerian singers are the royalty of opera singers and are in demand.

Less than thirty years after Wagner’s death, American bass-baritone Putnam Griswold (1875-1914) became known as the leading interpreter of Wagner’s   heroic bass roles.  His success did not come overnight and required years of training. 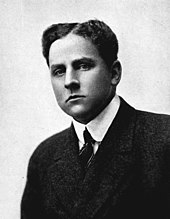 Born in Minneapolis, Minnesota and raised in California, Griswold Putnam followed a business career.  At the age of 22 he discovered his singing voice.  He began his training in California, studied in London, Paris, Frankfurt and Berlin.  His opera debut was at the Royal Opera House in London in 1901.  He became a regular member of the Berlin Opera performing Wagner’s great bass roles.   Germany’s Kaiser Wilhelm twice decorated Griswold for being the foremost interpreter of Wagner…..and he was a foreigner!

In 1911, Putnam made his Metropolitan Opera debut performing the role of Hagen in “Götterdämmerung.”  The Metropolitan Opera became his home until his sudden death from an attack of appendicitis in 1914.  His fans were devastated. 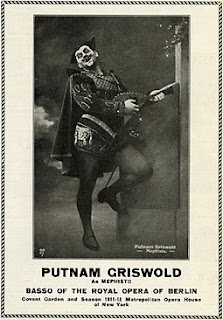 When Putnam Griswold died in New York City, his funeral was held at the Broadway Tabernacle Church, Broadway and Fifty-Sixth Street.  This is the church where Gena and her family worshipped.

Another famous singer from Miss Branscombe’s era graced her home to rehearse her music with her!

Posted by Kathleen Shimeta at 11:28 AM