At the bottom of Gena Branscombe's letter she wrote, “My loving thoughts go out to you –I never forget you.  Noone should mind being older, life is just better and better.”  The letter’s envelope is post marked May 23, 1968, has 6 cents of stamps on it and is addressed to Mrs. Marie Zieres. 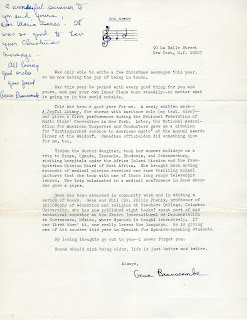 Over the thirteen years of writing my blog, Music Meets Drama, I have written about Gena Branscombe’s prolific letter writing three times.  A number of her original letters to friends, colleagues and former Branscombe Choral members have become a part of  my Gena collection. 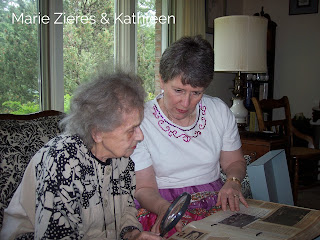 In June 2008 Dan and I drove to Jamestown, NY to meet Marie Zieres, a former Branscombe Choral member.  Just weeks before our visit with Mrs. Zieres, the Branscombe Choral scrapbooks had come into my possession.  In their protective boxes, the scrapbooks also made the trip to meet Mrs. Zieres.  Before our arrival she had brought out her remembrances of being a Choral member – her red choral folder, 45 rpm records and programs of the concerts as well as letters from Miss Branscombe.  What a heart-warming visit where I learned a great deal about Gena and her Choral. 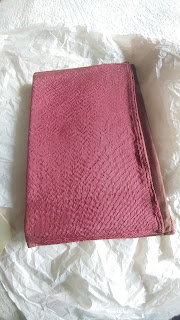 Four years ago Mrs. Zieres’s grandson Mark gifted me his grandmother’s red Branscombe Choral folder.  Inside were concert programs and a receipt for her membership fee. 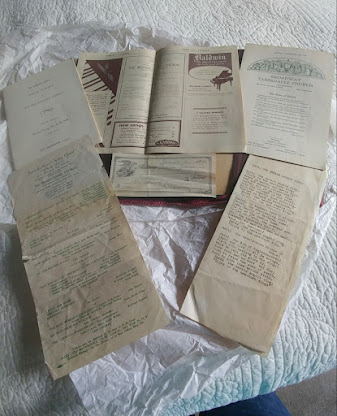 A few weeks ago the 1968 letter appeared, again, sent to me from Mark.

Miss Branscombe’s typed letter is filled with belated holiday greetings, news of her newest composition being performed at the National Federation of Music Clubs’ Convention, an award she received and saying “Canadian officialdom did something nice for me, too.”  There is news of her two daughters, Vivian and Gena as well as Gena’s husband Dr. Philip Phenix.

This lovely, newsy typed letter has a personal hand-written section wishing Mrs. Zieres a wonderful summer and thanking her for her Christmas message.  She, signs the letter, “Your friend – Gena Branscombe”. 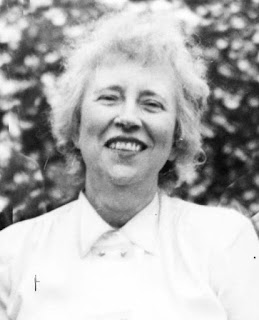 Letters - personal letters – there is nothing quite like them for the intimate quality that e-mail cannot replicate.  If you think about it, Gena Branscombe actually held and touched this paper, her whole being sent the message and signed it.  Letters - - personal letters.

With many thanks to Marie Zieres’s grandson, Mark.

And, remember, “Noone should mind being older, life is just better and better.”

Posted by Kathleen Shimeta at 9:30 AM