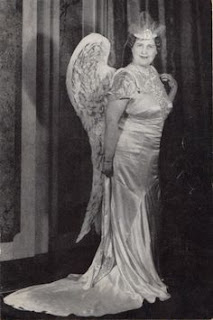 For decades singers and the public have been introduced to and listened to the recorded singing of Florence Foster Jenkins (1868-1944) which leads to uproarious laughter and head shaking disbelief that someone could possibly sound like that and be proud of it.  Her sense of pitch is precarious, correct rhythm was not in her personal music lexicon and phrasing did not seem to interest her.  Her recitals presented in her apartment or private clubs were by invitation only.  With over-the-top costumes designed by her and befitting the arias she was performing she added flowers, props and even some dancing. 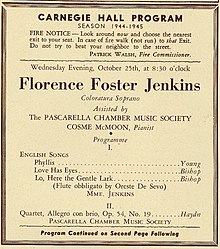 Because her recitals had become notorious, Florence Foster Jenkins booked Carnegie Hall for her October 25, 1944 recital.  Tickets were at a premium and sold out weeks before the concert took place.  The audience laughed, applauded and scoffed her.  Scathing reviews from New York City’s papers appeared the following day.

Unanswered are the questions: “Did Florence Foster Jenkins know how bad her singing was?”  “Emotionally how did she handle the rejection?”  “Was she self-delusional?”

Aside from her singing, Florence Forster Jenkins formed the Verdi Club in 1917.  Attempting to impress her New York City high-society friends, she wished for them to appreciate her dedication to classical music’s traditions.  Membership grew to 400 people including honorary members Enrico Caruso and Geraldine Farrar.

What does all of this information about Florence Foster Jenkins have to do with Gena Branscombe?  There is an answer to this. 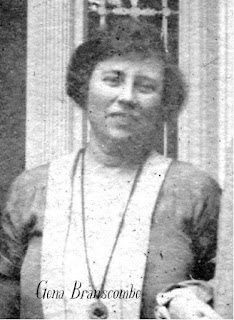 In a December 2, 1924 letter to Mr. Austin at Arthur P. Schmidt Company, Gena requests Mr. Austin to send Florence Foster Jenkins copies of her SSA arrangements of her songs, “Hail Ye Tyme of Holiedayes,” “A Wind from the Sea,” and “Spirit of Motherhood.”  She then informs Mr. Austin that Miss Jenkins is the director of the Verdi Club.  Mr. Austin was meticulous about sending out the requested pieces of music.  Whether Miss Jenkins went on to have a women’s chorus of the Verdi Club perform these works is not known.  Yet, Gena, ever the self-promoter, knew of Florence Foster Jenkins and her Verdi Club.  Maybe her music would be recognized and performed.

Posted by Kathleen Shimeta at 10:02 AM