Binghamton musicians added to the value of events musical in this city yesterday when the Harmony Club presented a program of Gena Branscombe compositions at a musicale in the Monday Afternoon club.

With this popular composer as conductor and honor guest, with an audience that taxed the capacity of the clubroom auditorium, and with a well balanced and artistically presented musical menu, the event proved one of those pleasant, artistic hours of music such as gladden the hearts and find instant response in the minds of music lovers.

Proof that American music has made marked strides during the last few years is evidenced by the artistry of the Branscombe compositions, full of color and of charm. Vocal and instrumental numbers were interpretated in an interesting manner.  The Binghamton Press, Tuesday evening, February 28, 1928

Among Gena Branscombe’s 1928 letters to her publisher, Mr. Austin, at Arthur P. Schmidt Publishing, is the original newspaper article from The Binghamton Press (NY) with a picture of the composer.  There is no letter explaining how Miss Branscombe came to be invited to the Harmony Club and there is no letter reporting on how the event went. 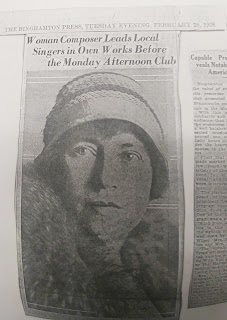 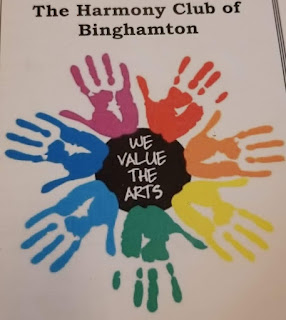 For 97 years, The Harmony Club of Binghamton, New York, has been sponsoring concerts, sing-a-longs, puppet shows and performances by members at their meetings.  They have awarded scholarships to local high school graduates!  Clubs such as this one were the main-stay of American music in villages, towns and cities across our country.  Professional musicians, famous musicians and local talents would perform a wide variety of music for these groups introducing new and familiar works. 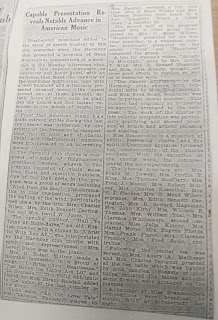 In 1928, Gena Branscombe’s music was considered new music for the audience of The Harmony Club.  She accompanied singers and instrumentalists as well as conducted the club’s chorus, who were all local musicians.  They learned and performed her beautiful, lyrical new music.

In 2016, The Harmony Club of Binghamton member, Dori Schriber, volunteered to be the club historian.  She has patched together, researched and created books of newspaper articles, programs and the club’s members through the years.  Their history is important to Binghamton and the arts world!

As I have said in several blog postings, Gena Branscombe was a self-promoter who reached out to share her talent as a composer of music that touched the hearts and souls of those who heard it.

As The Binghamton Press said:   Miss Branscombe is a musician of ability, possessing charm and fine spirit.

Posted by Kathleen Shimeta at 11:10 AM